As someone who cooks every single day, I always factor in the time-to-taste ratio of any recipe before I begin. In other words, the longer I spend making a recipe, the better I expect it to taste!

But not only does this vegan cheese recipe take less than 10 minutes of hands on time to prepare, it seriously tastes good. Better than good actually. It’s downright delicious. And unlike most other homemade dairy-free vegan cheese recipes, you won’t need a dehydrator.

How to Choose the Best Vegan Cheese

If you have our Clean Cuisine book  then you already know I am not a fan of “fake” foods. I don’t support artificial sweeteners, diet sodas or low fat, low calorie or low carb versions of the real foods. And I have never been a fan of counterfeit cheese either. So while I would not consider myself a connoisseur of dairy-free cheeses, the vast majority of ones I have tried do not taste good. To date, the only two vegan cheese brands I like are Kite Hill and Dr. Cow.

Like my vegan cheese recipe below, both Kite Hill and Dr. Cow are nut-based “cheeses” made without oil, fillers or funky additives. But other than those two brands, the other vegan cheeses I have tried are not only unpalatable, they aren’t even healthy!

Unless it’s a nut-based cheese with limited ingredients like Dr. Cow and Kite Hill, I would recommend avoiding them. For example, Daiya Foods brand “Cheddar Style Shreds” contains the following ingredients listed below:

If I had to eat a vegan cheese with the ingredients listed above I would rather just skip it altogether. And speaking of skipping out on cheese, let’s face it: giving up cheese is hard to do!

A Word About the Vegan Cheese Recipe Ingredients

Now I’m not going to stretch the truth and claim my vegan cheese recipe tastes just like the real deal. But because it is made with macadamia nuts, it has the rich and full-fat “mouth-feel” you would get from the real thing. And the non-fortified nutritional yeast adds the much-sought-after umami savory flavor real cheese delivers.

One important thing to keep in mind with the nutritional yeast though is that you want to make sure you get a non-fortified brand, such as Sari Foods. Most would assume that fortified nutritional yeast would be the most nutritious choice. However, in reality fortified versions are full of synthetic nutrients, which are not metabolized or utilized by your body in the same manner as naturally-occurring nutrients.

How to Use this Vegan Cheese Recipe

First of all, don’t expect the vegan cheese recipe to melt. It won’t melt. Our recipe is most similar to feta cheese in that it is soft with the full-fat “mouth-feel” described above. Instead of being creamy like many other cheeses, it is crumbly in texture. If you have ever had homemade Vegan Parmesan Cheese made with cashews, my version is softer, clumpier and a bit richer tasting.

I realize the clumpy part might not sound good, but it is clumpy in a good kind of way—again, similar to feta cheese.

Even though it won’t melt, there are plenty of ways to put your vegan cheese recipe to good use, including: 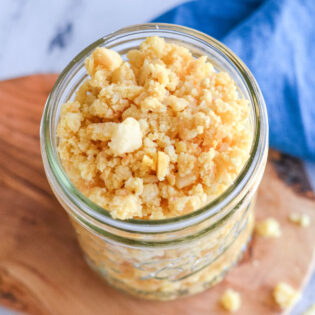 Vegan Cheese Recipe is super easy nut-based recipe to make (no dehydrator necessary) and has a delicious flavor and rich texture.

Vegan cheese recipe will keep for up to a week if stored in covered container and refrigerated.