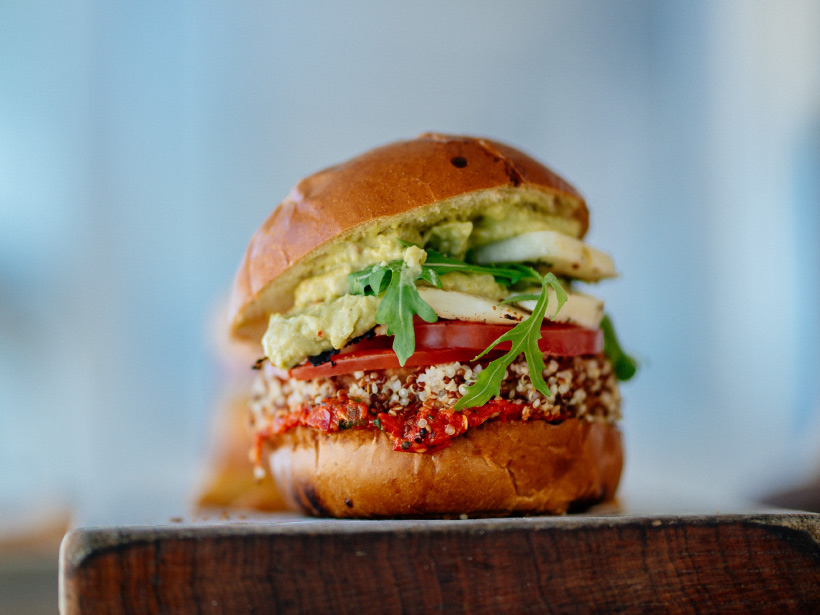 Have you recently been reading about the health benefits of incorporating more raw food into your diet? You know, glowing skin? More energy? Clearer thinking? Are you also intrigued by how creative chefs have been able to elevate raw food on a gourmet culinary level lately? Have you heard about the uber trendy New York raw hot spots, such as Pure Food & Wine? If so, you are probably just looking into beginning raw food recipes yourself….

Vegan burgers are a great everyday food that are fool proof, easy to make and seriously good to eat. When beginning raw food recipes it helps to be able to associate the food with something that is more “mainstream”. Burgers are about as mainstream as you can get—and they are unintimidating. Everybody loves to put meat (or in this case, nuts and seeds!) between a  bun and eat it with their hands. Other great beginning raw food recipes include soups and smoothies, but those aren’t as much fun to make as a burger.

Although I’m not a raw foodist I can very much appreciate the health benefits of including raw whole foods in my diet on a regular basis. All that stuff about how eating raw foods will help make your skin glow, give you more zip, pep and go, etc. really is true. But you absolutely do not need to go 100% raw to reap the benefits either. Instead, try doing what I do, which is to try and eat either one raw fruit or one raw vegetable with pretty much every meal. And sometimes I’ll go completely raw with a raw entrée (like my vegan burgers)…but just for one meal.

But What Will the Men Think? Will Real Men Eat Vegan Burgers?

Although I’ve been experimenting making raw vegan burger recipes for a few weeks now, I’ve really just been making them for myself for a quick lunch. My husband has been hearing me talk about them, but he hadn’t actually had the opportunity to try one. But, lucky for him, he got his big chance to be my official vegan-burger-recipe-taste-tester the other day when our computer crashed…..

I was stuck in “berserk mode” for over 12 hours; the first few hours were spent on the most annoying and unproductive phone call with our HP Support System service (the support guy actually had me try to fix the “mother board”) and the rest of the time was spent with a tech guy at the house. While the tech guy worked on the computer I had plenty of time to fool around in the kitchen and come up with my newest vegan burger recipe.

It’s not that I expected the computer guy to be totally enthused with what I was doing in the kitchen, it’s just that usually when I’m cooking something you can smell the food so even people who don’t like “clean eating” still show an interest in what you are doing and usually they say it smells good … or at least they say something complementary. When you are uncooking (making raw food) nobody can smell a thing so nobody says a word. And when they think it’s “raw” and they hear a food processor grinding a bunch of seeds and stuff together they get a little nervous. So the tech guy politely said nothing about my burgers.

When my husband came home around 8 p.m. (and the tech guy was still working!), he was starving and wanted to know “What’s for dinner?” I started talking about the raw vegan burgers and explaining how they have several different types of seeds, etc. The tech guy pretended he wasn’t paying much attention to our conversation until he saw Andy give me a look that sort of said “Is that it? Are we going to eat anything else?” The computer guy started laughing and finally made the comment that maybe I’d better serve some real burgers as an appetizer.

Ok, I get it. I know most guys aren’t into vegetarian food, much less vegan raw food. But all I can say is that if it tastes good and fills them up they’ll eat it. My husband ate three raw vegan burgers (along with a side of fresh guacamole spread on sprouted whole grain bread chips and a spinach salad with my special lemon hemp seed dressing with fresh berries and coconut “ice cream” for dessert) and he was full. And he was happy. And as for the tech guy, he quickly got the computer fixed before dinner was served 😉