Benefits of Cordyceps Broth – The benefits of cordyceps are both energy-boosting and anti-aging. With many more cordyceps benefits, they are much more useful than just the delicious flavor they add, they’re also incredibly healthy for you!

If you are following a clean eating diet, you may already use cordyceps in your meals. This recipe for cordycep broth is going to bring you to a new level of delicious!

Before we get to the broth, let’s start with a brief overview of cordyceps. Consuming this medicinal mushroom just a few times a week could offer a number of different health-boosting perks you definitely don’t want to miss out on! And like we mentioned above, they aren’t hard to fit into your diet, because they’re just that tasty!

Of all the medicinal mushroom benefits, these are the two that you are going to appreciate the most. Here is a list of our most popular Q+A from readers here at Clean Cuisine.

#1: What are the Energy-Boosting Benefits of Cordyceps?

Cordyceps are a fungus that have been used as a tonic and restorative in Chinese medicine for over 2,000 years. In Ayurvedic medicine, they are said to be beneficial at enhancing vigor and vitality.

The benefits of Cordyceps have also been linked to improved athletic performance. A 2010 study published in the Journal of Alternative and Complementary Medicine showed that supplementation with Cs-4 (Cordyceps sinensis) improved exercise performance and contributed to overall markers of wellness in older adults.

In addition to boosting energy, studies show that cordyceps increase oxygen capacity and ATP production within muscle cells. This improves athletic performance. Although at this stage in my life, I wouldn’t consider myself an athlete by any means, I can say I notice a major difference with cordyceps. On the days I workout and also take cordyceps, I seem to be able to push harder and workout stronger.

Similar to other superfood herbs like maca, cordyceps can also help fight fatigue.

#2: How Do You Consume Cordyceps?

Personally, I prefer to add them to soups and stews, or drink them in a tea or broth made from powdered cordyceps. However, you can consume cordyceps in many different ways based upon preference.

I buy the Organic Cordyceps Mushroom Powder online from Amazon. However, some people find it more convenient to take cordyceps as a liquid extract or in capsule form. I much prefer consuming it more like a food though.

Just like most mushrooms, cordyceps have a savory umami-quality and a deep earthy-nutty flavor. I find this enhances the overall quality of certain foods, especially soups and broths.

All-in-all, enjoying cordyceps with most types of savory dishes will ensure a tasty finished product.

#4: How Often Should You Take Cordyceps?

To treat general weakness or fatigue, it is typically recommended to take cordyceps once or twice a day. I suggest taking your cordyceps before noon, as taking it later in the day can keep me from falling asleep at night.

I should also add that on the days I do take cordyceps, I sometimes have some incredibly lucid dreams. Although they are good dreams, they’re vivid, like what I used to have while I was pregnant. At first I thought the dreams were a coincidence, but I am now convinced the cordyceps definitely play a role.

As with anything that is being taken to increase energy, you probably don’t want to take cordyceps every day. Personally, I usually take it two or three times a week by eating the broth recipe below. On the days I do take it, I notice a major increase in energy.

Although I don’t have any research to back this up, I have a feeling if I took cordyceps every single day, my body would eventually build up somewhat of a tolerance. This could potentially lead to the energy-boosting benefits diminishing. ***For additional caffeine-free ways to boost energy on the days you don’t take cordyceps, be sure to check out alternatives to coffee and “B Tea”.***

#5: What Are the Anti-Aging Benefits of Cordyceps?

While cordyceps are an amazing, natural way to boost energy, they offer much more benefit than just this. Cordyceps are also highly effective at fighting free radicals as well as diseases, such as cancer.  In addition to this, cordyceps have potent anti-inflammatory benefits. Studies also show their role in improving liver function, and detoxifying the body.

Research even shows cordyceps have the potential to correct cardiac arrhythmia and lower blood pressure.  If you are trying to keep your heart healthy and lower your blood pressure with food, adding cordyceps to the menu might be a very good move!

#6: Can Taking Cordyceps Boost Your Mood?

Based on my personal experience, I think so. Though the mood-boosting benefits of cordyceps may be partially related to the energy surge I notice after taking it, I believe it also has something to do with Cordycepin (one of the active components in cordyceps).

Cordycepin has been shown to have strong anti-depressant effects in animal models of depression. Personally, I think cordyceps gives me a lift, both physically and mentally. Research shows cordyceps act like an adaptogen, which means it should help increase the body’s resistance to stress, trauma, anxiety and fatigue. I think it is safe to say any substance that can do all that can probably help improve your mood too!

#7: Is There Any Downside to Taking Cordyceps?

As with just about anything good, too much of a good thing is usually bad. Although I would say if you consume cordyceps 2 or 3 x’s a week, it is not excessive at all. With that being said, there is a potential risk for anyone with a known autoimmune disease. This risk lies in the idea that taking cordyceps could possibly stimulate the immune system, potentially aggravating the condition.

Cordyceps can also potentially interfere with medications used to treat autoimmune diseases, and in theory over-activate certain immune cells. The same warning goes for anyone with a known bleeding or blood clot disorder, since medical mushrooms can sometimes interfere with proper blood clotting. If you are having surgery you should stop taking cordyceps 2-weeks before surgery to reduce the risk of excessive bleeding.

The only other special population group who might want to rethink the use of cordyceps are pregnant or nursing mothers. Pregnancy naturally suppresses the body’s immune system. Because of this, I would be a little nervous about taking something that could possibly stimulate the immune system while I was pregnant or even nursing.

If you have an autoimmune disease, it is always best to be safe than sorry. I would suggest starting with just a teeny amount of cordyceps and seeing how you feel.

How to Eat Cordyceps

Earlier, we mentioned that cordyceps can be enjoyed in a variety of ways! While most often found in soups and broths, there are many other ways to get more of this powerful superfood into your diet.

Get creative, and feel free to experiment with adding cordyceps into your diet in a variety of ways. Have a favorite way to enjoy cordyceps? Leave it in the comment b

Ready to learn more? Let’s get into all the details! 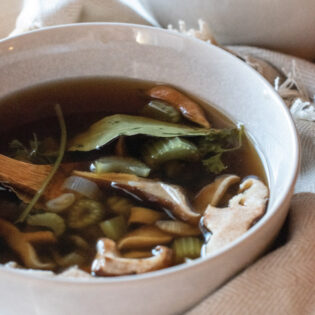 Reap the energizing, anti-aging, mood-lifting and health-boosting benefits of Cordyceps mushrooms with this easy-to-make broth recipe.