All blueberries are superfoods, but wild blueberries, pack a much bigger nutrition punch than your typical cultivated blueberry. They even taste better!

Wild blueberries are smaller in size and they actually stay whole when you cook them, which makes them perfect for recipes such as Blueberry Waffles, Blueberry Pancakes, and Blueberry Custard. Wild blueberries also make the absolute best blueberry muffins! Small but mighty, wild blueberries have more total antioxidant capacity (ORAC) than almost all of the typical fruits and vegetables you see at the grocery store and they have a considerably higher ORAC value than their bigger cousins, cultivated blueberries. The higher the ORAC value of a food the more powerful that food is at slowing the aging process, fighting disease, reducing inflammation and preserving health.

Anthocyanin is one of the super powerful antioxidants found in wild blueberries and is believed to protect against brain aging. In fact, in the first human study of its kind, researchers demonstrated that anthocyanin-rich Wild Blueberries are highly beneficial in maintaining memory function. The study, conducted by a team at the University of Cincinnati, confirmed that Wild Blueberry supplemented diets improved memory function and mood in older adults with early memory decline. (Journal of Agricultural and Food Chemistry. 2010; 58, 3996-4000) 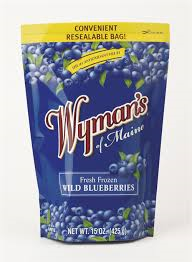 Where Can You Buy Wild Blueberries?

Unless you live in Maine, Atlantic Canada or Quebec, chances are that your local supermarket probably will not regularly stock fresh wild blueberries. So, if you want wild blueberries, you will most likely have to go for frozen. Luckily, Wyman’s sells frozen wild blueberries that are wildly available across the country (they even sell them in bulk now in places like Costco!) Within hours of being picked, Wyman’s sorts and cleans their wild blueberries using state-of-the-art technology that preserves flavor, quality and antioxidant goodness.

Frozen wild blueberries taste great and once thawed, they can be used just like fresh wild blueberries for a number of different recipes. The best way to thaw them is to line a pasta strainer with a paper towel and set the strainer over a plate to catch the juices (you can save the juice for making smoothies!) And speaking of smoothies, this is a great Wild Blueberry Smoothie Recipe (I just substitute coconut milk for the buttermilk.)