If you’ve never tried Celery Root Soup, or celery root in general, there’s no better time than now! This hearty soup has all the creamy, starchy components of a comfort food, without all the bloating and digestive upset that often follows.

This soup was created with digestion in mind. Created not only for flavor, this Celery Root Soup was made with the intention of you finishing your meal feeling great! Because of this, the ingredients in this recipe are all grain, gluten, and dairy free, and modifiable for a vegan diet!

For me, there’s nothing better than cutting down on my cooking time, and enjoying quick healthy recipe all week long. This Celery Root Soup is among my top few favorites, for many reasons! Not only is it easy to throw together, but the flavor is unmatched!

One of the biggest complaints I hear about eating clean is all of the meal prep and time in the kitchen that is required. And it’s true! Eating healthy requires a lot more time than frozen meals and take out. However, it’s completely doable with the right methods!

One thing that has majorly cut down on my kitchen time is cooking in large batches. I always try to keep at least one soup in the fridge at all times to enjoy throughout the week. It really makes a huge difference! Having a meal ready to heat up not only saves time, but keeps you from veering to unhealthy choices when you’re hungry.

I love how easy it is to throw everything into a pot, and know that you’re making a nutrient-dense, well rounded meal to enjoy for days!

Looking for more ways to clean up your diet? We believe that the Healthiest Food Starts with Healthy Cookware! Click here to learn more!

I have to be honest and say that prior to a few months ago, I had no idea what celery root, or celeriac even was. It actually all began when I found myself in a rut with my diet. I hit a plateau where I was not only bored of the foods I had been eating. I really felt like I had no creativity to create any more recipes with the foods that were safe for me.

This is when I began branching out. There are quite literally thousands of food sources in nature that often go overlooked. I decided I was going to find them!

So while celeriac actually isn’t too uncommon, I discovered much more along the way. From cricket flour, to lotus seeds (very common in Indian culture), to cauliflower and pumpkin flours, among much more, I realized I was missing out on so much!

With all of these new ingredients to experiment with, I was so excited to get back into the kitchen, and start cooking again! That’s when I began experimenting with this Celery Root Soup.

Celeriac is simply celery root! It has a subtle flavor of celery, but the texture of a white potato. It’s amazing for taking the place of potatoes in recipes, even working great when mashed as a mashed potato substitute.

Leeks are another vegetable I hadn’t commonly used prior to this recipe. They’re very similar to green onions in taste, but become tender, and offer a mild sweet flavor when cooked.

The cauliflower in this recipe is really what sets it apart as a stew, instead of a soup. But blending the cauliflower with the chicken broth, you’re left with a creamy base, without any dairy!

Love the creaminess of cauliflower as much as we do? Try some of our recipes with cauliflower by clicking here!

While this stew is delicious meat-free, if you’re looking for a bulkier version, ground turkey is the perfect addition!

Want to learn how to pick healthy meat? Click here!

If you’ve never tried celeriac and/or leeks before, this Celery Root Soup is a great place start! With only 30 minutes of hands-on time, you can enjoy this warm, hearty soup all week long! 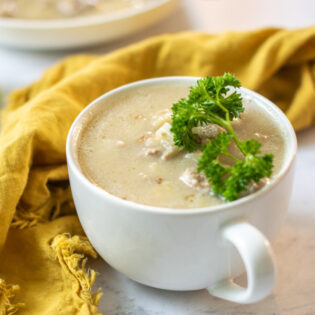 This delicious stew can be ready in as soon as 1 hour, or prepared in the slow cooker.