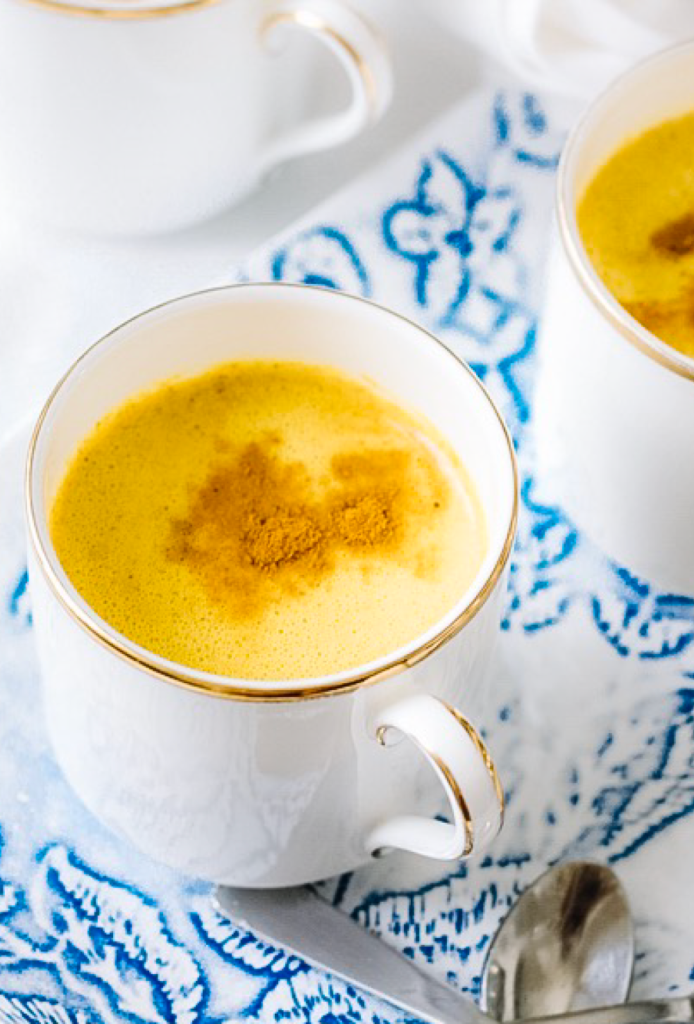 A Chai Golden Latte is sure to make you feel better. Even if you think you feel just fine, I’m willing to bet you’ll feel even better after a Chai Golden Latte. You’ll either be happier or move easier or have more energy or something. Ok, so I can’t guarantee it 100%, but assuming you are not allergic to any of the ingredients, I am willing to bet you’ll notice a difference.

You have nothing to lose by giving it a try.

A Golden Latte Will (Probably) Make It All Better

A little late to the game, I first heard about Golden Milk while we were in Costa Rica for a week retreat at Rythmia Life Advancement Center. Coffee was strongly discouraged at the retreat and Golden Milk was served instead. I was not particularly enthused about the idea of giving up my coffee for the week (especially since Costa Rica is known to have some of the best coffee in the world!), but I went along with the program anyway. I knew about the coffee restriction going to the retreat and had brought along my favorite alternative to coffee, Dandy Blend (an instant herbal beverage) just in case the whole no-coffee thing became unbearable.

Much to my surprise, I found no need for Dandy Blend –or even coffee!—with Golden Milk. I’m not a morning person, but each morning after sipping my cup of Golden Milk I felt energized, happier and ready to go. Keep in mind, Golden Milk is not nearly as potent from a therapeutic standpoint as Turmeric Chai Golden Latte. The Golden Milk served at Rythmia was basically just warm coconut milk with turmeric and a sprinkling of spices (cardamom and cinnamon).

I came up with this latte recipe after returning from a family ski trip to Whistler, where I enjoyed a Turmeric Chai Golden Latte as my Après ski beverage every day after hitting the slopes. If you have ever gone skiing (and you are also over the age of 40!), then you know what the sport can leave you feeling like at the end of the day. Sore!

My Golden Latte was the one thing I looked forward to having as soon as we got back to our hotel. It made me feel better almost immediately. Made with both ginger and turmeric, this warming chai has incredibly potent anti-inflammatory properties. By adding the black pepper and a bit of good fat (from the coconut milk and the GLA-rich hemp seeds), the anti-inflammatory properties of turmeric are fully activated.

A Turmeric Golden Latte a Day Will Keep the Doctor Away…

A potent anti-inflammatory that exhibits over 150 potentially therapeutic activities, including antimicrobial activity as well as potent anti-cancer properties, turmeric is the star ingredient in my Latte recipe. Capable of anti-inflammation for everything from aches to arthritis, glowing skin, boosted immunity, improved digestion, and even a cure for depression and cancer, turmeric is one of the most therapeutic spices that exist. The benefits of turmeric are truly too many to even include here.

I will just end by saying this, if you are serious about clean eating and following an anti-inflammatory diet, then you might really want to consider adding this beverage to your daily regimen. I have a number of additional anti-inflammatory turmeric recipes on the blog (such as my mood-boosting turmeric smoothie, turmeric detox smoothie/ popsicles, turmeric vinaigrette, etc), but this one is definitely the most potent! 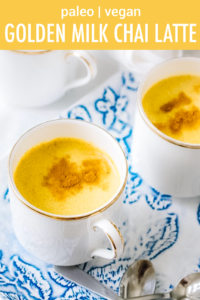 Save this graphic for later!

Golden Chai will keep for 3 to 4 days if stored in a covered container in the refrigerator. Shake before heating.