We love homemade gluten free pizza. As much as I do really love healthy food I’m not so dietetically pure that I’m going to try and convince you I don’t like foods like ice cream, French fries and pizza. Let’s be frank: who doesn’t love to eat pizza?

Homemade Pizza is the Best

In my clean eating quest, I’ve been making my own homemade whole grain pizza out of white whole wheat flour (read more about white whole wheat flour HERE) and flaxseeds for a few years now. Making homemade pizza is actually pretty easy. I also have a more “adult” version of homemade whole grain pizza that’s also super easy and very veggie-rich. But, since I keep getting requests for gluten free this and that, including gluten free pizza and crust recipe, I thought I’d experiment a bit and see what I could come up with…

Gluten free is sort of a buzz word in many health circles these days. Back in the 90’s “fat free” was in, then “low carb” resurfaced and now “gluten free” is all the dietary rage. But, just because a food is “fat free”, “low carb” or “gluten free” does NOT make it an intrinsically healthy food (if you to have a gluten intolerance or celiac disease you of course need to avoid gluten for health purposes.)

Food manufacturers capitalize on whatever dietary trend is “hot” at the moment and they more often than not concoct some highly processed empty calorie food product that meets nutrition-of-the-moment criteria. Gluten free pizza crust is a perfect example.

You can absolutely buy a premade gluten free crust but chances are it’s gonna be made with a bunch of empty calorie ingredients (white rice flour, potato starch, potato flour, tapioca flour, etc.)

Since it’s a challenge to make a gluten free pizza crust recipe taste good while using flour that’s free from gluten, I decided to experiment a bit and make an “outside of the box” flour-free.

Gluten free pizza recipe from beans, cooked whole grain brown rice and flaxseeds…which happens to be a super healthy clean eating recipe that really and truly does taste good. And fine, I’ll admit the crust sounds strange. But it does work. And it is tasty. As long as it’s healthy and tasty, I’ll eat it.  As an added bonus it’s incredibly easy to make too.

Note: if the pizza crust is difficult to handle and doesn’t seem “sticky” enough you can try adding 2 tablespoons of ground flaxseeds at a time. 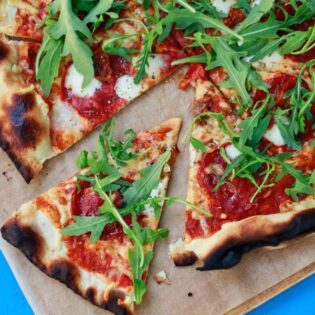 Note: You can’t exactly pick my pizza up the same way you would a “normal” pizza, but it’s easy to eat with a fork and knife.