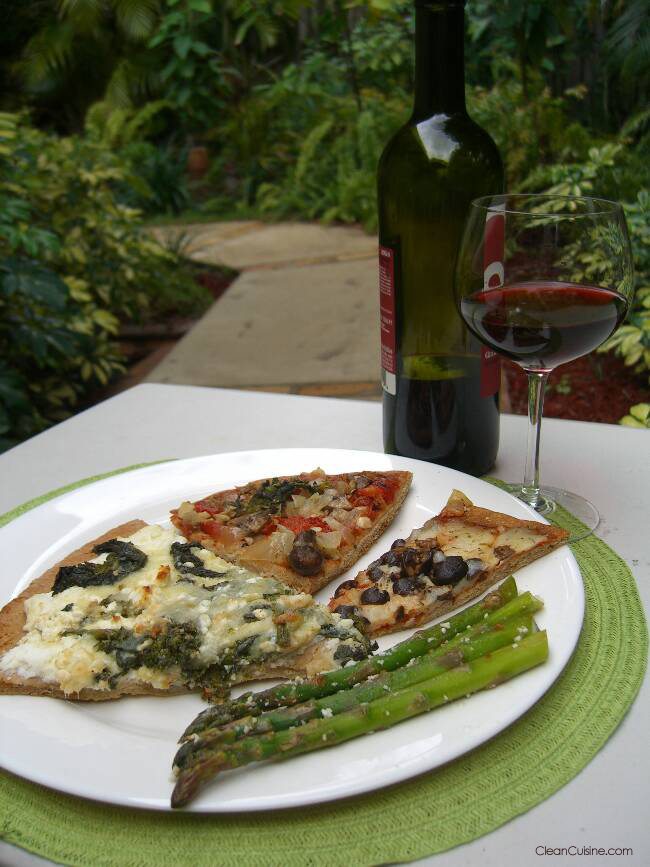 To be honest, I never ever would have attempted to make pizza from scratch if it weren’t for our good family friend, Joe Riti (that’s Joe cooking in my moms kitchen in the photo above!) Joe is truly a master of Italian cooking and he’s been making pizza since he was a kid. I can honestly say he makes the most amazing pizza I’ve ever had. His pizza even beats the pizza I had in Italy.

When I was working on my third book, Whole Foods Diet Cookbook, I was lucky Joe was down visiting from New York and he spent an entire afternoon showing me the ropes on how to make authentic Italian pizza. Although Joe makes every aspect of cooking appear as though it’s second nature I was so surprised that making pizza from scratch really wasn’t as overwhelming as I thought it would be. In fact, it’s actually not that difficult at all. Joe helped me tweak the recipe to make it 100% whole grain using white whole wheat flour. And we even added some flaxseeds. This ultra healthy “eat clean” whole wheat pizza recipe tastes far better than anything you get in a package off the supermarket shelf. And it’s fun to make too! 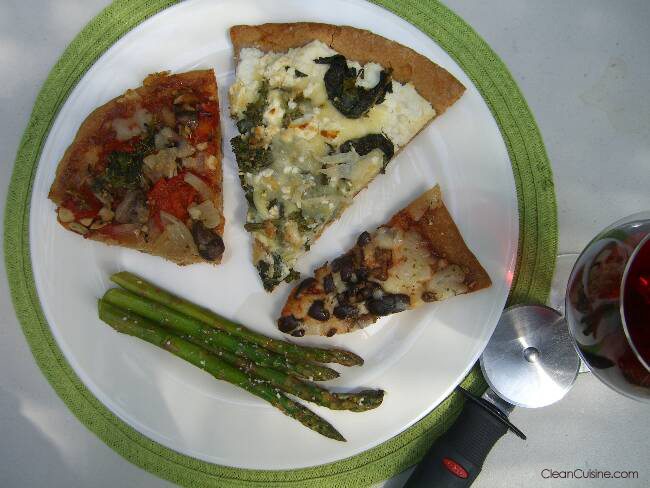 You’ll notice three different pizzas in the photos. This is because Joe doesn’t like to make just one type of pizza. He even goes so far as to make his marinara from scratch. I admit I don’t always go that far as I usually cheat and buy a premade marinara (my favorite is the pricey Rao’s Marinara but I also really like the more economical Amy’s Kitchen Organic Family Marinara). Anyway, once you cook the dough I’ve included three varieties for toppings. Don’t get hung up on measurements. Topping your pizza does not require mathematical precision. Winging it works.

Start by spreading a thin layer of marinara over the dough. Then sprinkle on a bit of shredded mozzarella. Time for the toppings; you can use black or green sliced olives, either one will do. For the onions, just slice them thin and sauté in a bit of extra virgin olive oil and garlic before adding them to the pizza. You could also add some very, very thinly sliced tomaotes if you like (the thinner you slice them the better!) Season the toppings with salt and garlic powder before baking. Bake at 400 degrees for about 12 to 15 minutes.

Start by spreading a thin layer of marinara over the dough. No cheese this time. Again, you’ll want to slice your onions thin and sauté them in a little extra virgin olive oil and garlic before adding them to the pizza. You also want to sauté your mushrooms in extra virgin olive oil and garlic too. For the spinach, you can use frozen chopped spinach; thaw in the microwave and then use paper towels to press out every last drop of water. Season the toppings with salt and garlic powder before baking. Bake at 400 degrees for about 12 to 15 minutes.

This one is the least healthy beecause of the cheese, but it does taste amazing. You start by brushing a thin layer of ricotta cheese (I buy grass-fed from Natural by Nature). Then sprinkle on a bit of crumbled feta cheese and then some Parmesan cheese. No need to go overboard adding globs of cheese. A little bit will do. Then you add the sautéed onions (again, thinly sliced and sautéed first in garlic and extra virgin olive oil). Then add the sautéed broccoli raab (Here’s the recipe for How to Cook Broccoli Raab Perfectly). Season the toppings with unrefined sea salt and garlic powder before baking. Bake at 400 degrees for about 12 to 15 minutes.