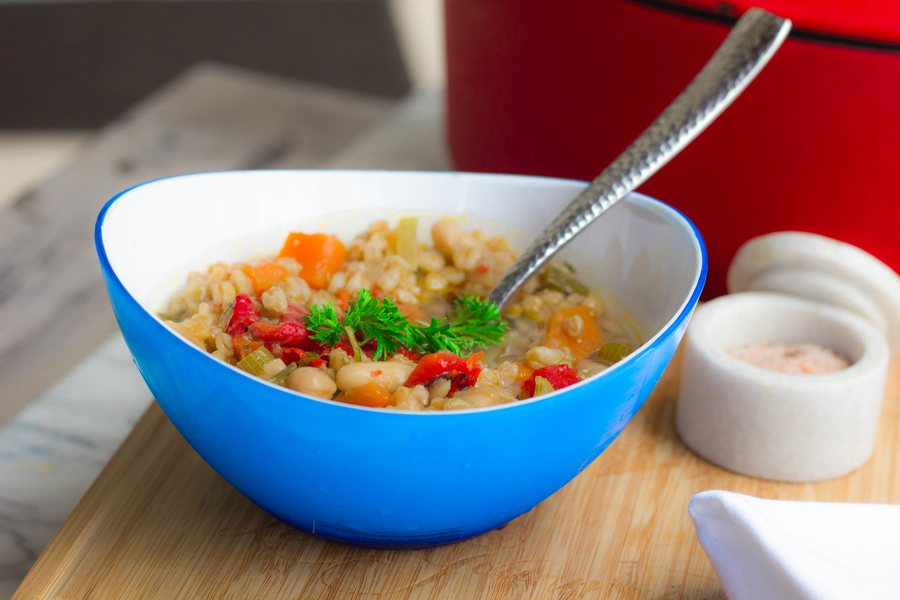 If you have not yet started to cook with ancient whole grain farro, this Tuscan farro minestrone soup recipe is a good place to start. A meal-in-a-bowl, it’s hard to go wrong with minestrone! Thanks to the farro, this version is more filling than classic minestrone recipe made with pasta. And trust me, if you happen to have a 17-year old teenage son who works out just about every day then you need hearty and filling recipes 😉 Not only is farro more filling than pasta, it’s also a lot more nutritious…. 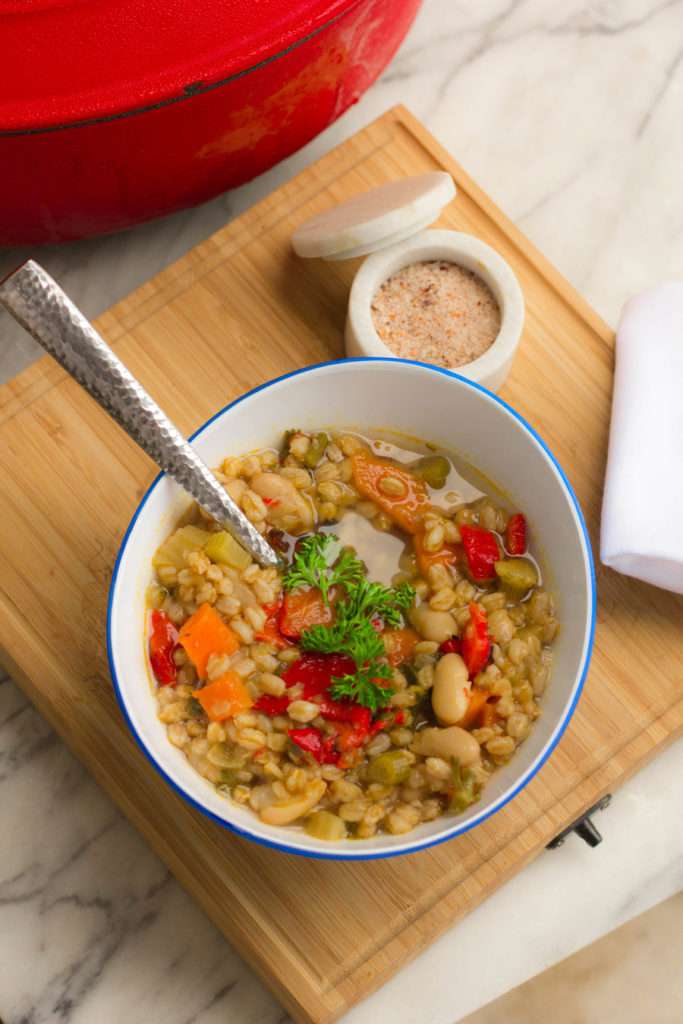 Farro looks a lot like wheat berries— it’s a small light brown grain with a visible bran and it makes a great alternative to rice, quinoa, buckwheat, barley, spelt or other ancient grains. A savory “old world grain”, farro has a nutty earthiness and satisfying chew that is often used in soups, salads and even dessert. And nobody says you can’t have a bowl of farro with fresh berries, almond milk and a drizzle of raw honey for breakfast either!

Farro is a form of wheat and therefore NOT gluten free. However, in comparison to wheat, farro is a low-gluten whole grain that can often be tolerated in small amounts even in individuals with non-celiac gluten sensitivity (note: those with celiac disease should not consume farro.)

Farro has more fiber than just about any other whole grain. Just one cup of farro can provide a whopping 20% of the daily recommended fiber intake! As we discuss extensively in our book, fiber is an anti-inflammatory substance that plays a critical role in maintaining good health. And one type of fiber in farro called resistant starch is particularly helpful for weight loss (Read more about the benefits of resistant starch.)  The fiber in farro also plays a very important role in maintaining a healthy gut. Oligosaccharides are one particular type of fiber found in farro that function as a prebiotic in the colon. The bacteria that feed on oligosaccharides produce many beneficial substances, including short-chain fatty acids (SCFAs) and certain B-vitamins. Additionally, there is even some evidence that they may promote further absorption of some minerals that have escaped the small intestine, including calcium and magnesium. In addition to fiber, farro is also an excellent source of plant protein, antioxidants, phytonutrients (including lignans), B vitamins, zinc and iron. 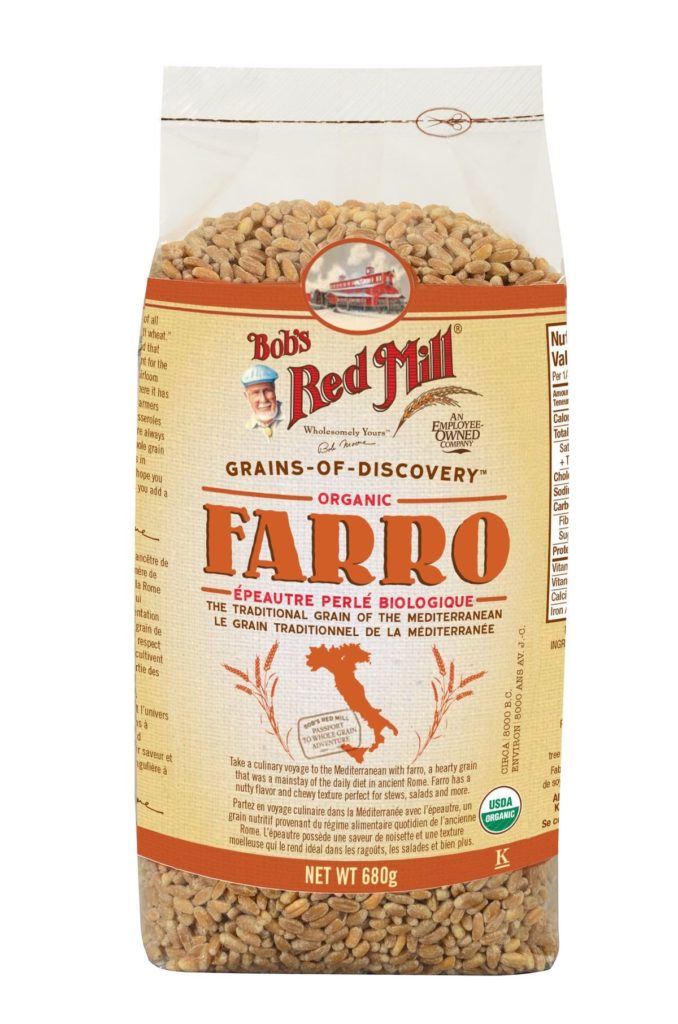 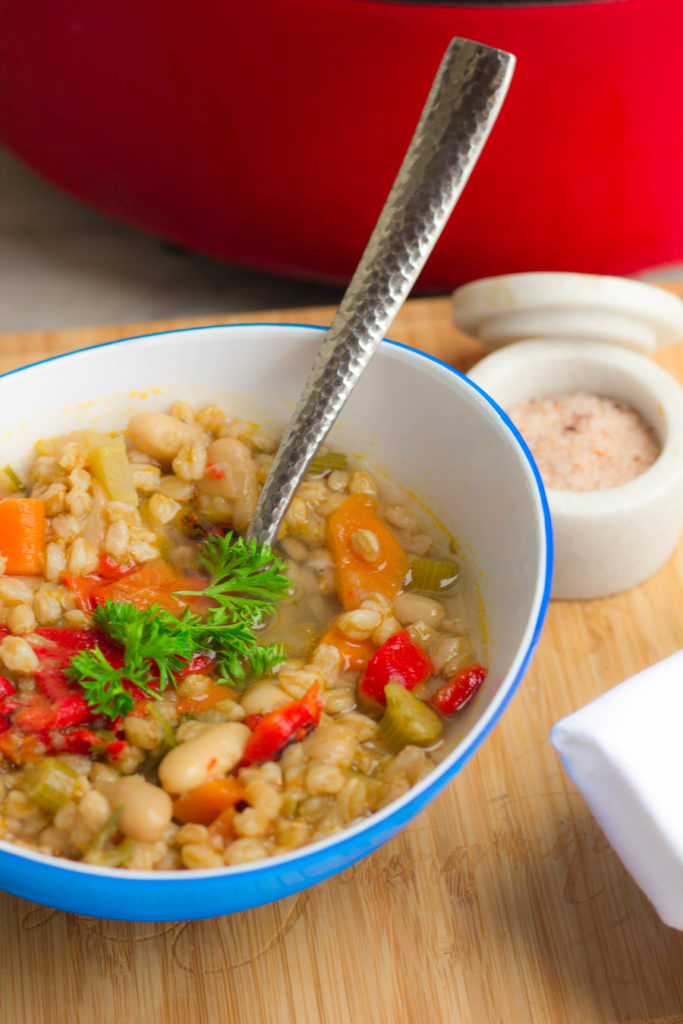 Yes! Although whole grain farro might sound like some new age hippie food, it’s actually been a part of authentic Italian cuisine for centuries. A rustic staple grain, farro is believed to have sustained the Roman legions. In fact, it was on a family trip to Rome, Italy last year where I had my first farro minestrone soup recipe. (I did a blog post HERE on what I learned after eating REAL Italian Meals for a Week!) But now farro is moving from rustic Italian tables into fashionable restaurants not only in Tuscany and northern Italy (where it seemed to be everywhere on menus!), but also in the United States, particularly on the West and East Coasts. According to the New York Times farro dishes are now regularly on the menus at high-profile restaurants like Union Square Cafe in Manhattan, Zuni Cafe in San Francisco, Chez Panisse in Berkeley, Calif., and Olivetto in Oakland, Calif. 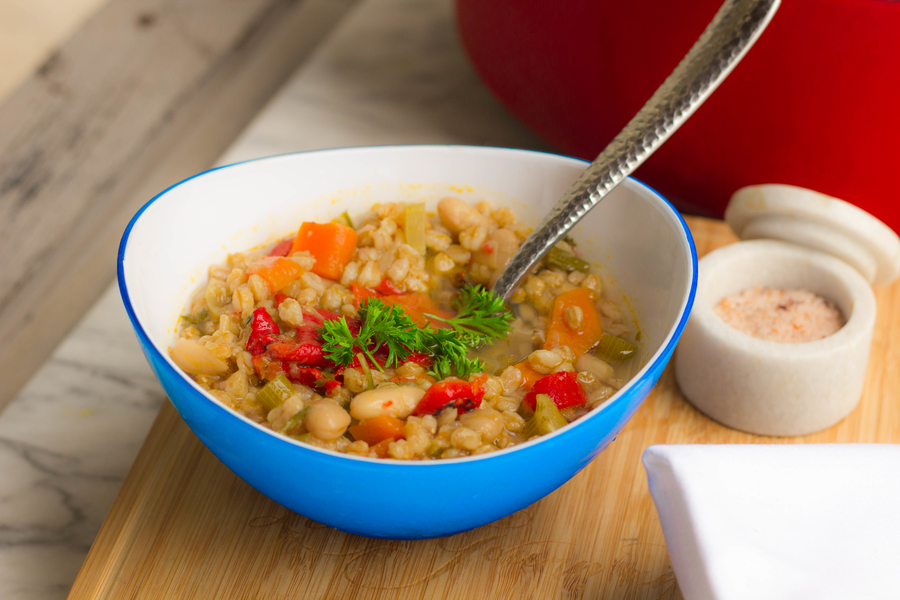 For those of you with food allergies and food sensitivities, it’s helpful to know this Tuscan farro minestrone soup recipe meets the following dietary restrictions:

Tuscan farro minestrone soup recipe uses whole grain farro instead of pasta for a healthier option. Farro has a great chewy texture and subtle nutty flavor that makes it a perfect match for minestrone!

198 shares
« Previous Post
20 Years of Clean Eating (What Has Worked For Me)
Next Post »
5 Takeaways from "The Beauty of Dirty Skin" Book by Whitney Bowe, MD