In honor of Breast Cancer Awareness Month we decided to ask Robert Pendergrast, M.D., author of Breast Cancer: Reduce Your Risk with Foods You Love, if he had any culinary tips for how to reduce your risk of breast cancer while preparing Clean Cuisine.

When Dr. Pendergrast suggested doing an article on turmeric we were especially enthused because we know turmeric benefits are tremendous and well researched … and the benefits extend well beyond breast cancer prevention. In addition, turmeric really can be an exciting spice to experiment with in the kitchen (especially if you love Indian food.) We hope you find the article below as informative as we did.

Turmeric Benefits: A Spice That Could Save Your Life

I am hoping that turmeric will become one of your regular spice choices by the end of this page. You are probably familiar with it as one of the characteristic flavors of Indian curry, and I want to let you know also of the growing evidence for its medical benefits. But even if you are not an adventurous eater, you can still enjoy its benefits, either in “non-spicy” recipes or as an encapsulated supplement.

Turmeric is a spice that has well-researched properties for cancer prevention. It imparts that characteristic yellow-orange color to Indian foods, and has a distinctive flavor. It is not highly pungent or “hot” like chili peppers, just very flavorful. The spice is the ground powder from the rhizome (underground stem) of the plant, closely related to ginger. It has been cultivated and used in cooking for at least 4000 years of recorded history in India, so you can imagine how many recipes you could choose from after 4000 years!

First let’s talk about its potential for preventing breast cancer.

The major ingredient of turmeric powder is curcumin, which has normally been the subject of any medical research on this topic. Studies have shown that curcumin significantly slows the growth of breast cancer cells which were started by exposure to pesticides. And in combination with a soy protein the effect was even stronger. However, at least one study has shown that the addition of curcumin to the diet DURING chemotherapy for cancer made the chemotherapy less effective because curcumin is such a strong antioxidant. So let me be very clear: based on good science, I recommend that women who are concerned with breast cancer prevention eat this spice on a regular basis, and women who already have breast cancer can add it to their diet, but NOT during chemotherapy. Once finished with chemotherapy, using turmeric makes good sense as a way to enhance standard treatment.

If you don’t enjoy the taste, you can find it as a ground powder in capsules. While there are no standardized preventive dosing guidelines, I recommend somewhere around 500 mg of curcumin twice daily.

Next you should understand that turmeric is a potent anti-inflammatory. In fact, it is this strong effect against inflammation which in part explains its role in preventing cancer. But inflammation is involved in so many more unpleasant things in the body, notably arthritis, chronic pain, heart disease and Alzheimer’s disease.

Here’s a short simple way to look at how this spicy treasure can help turn that inflammation around. There is a class of enzymes called cyclo-oxygenases (COX for short) involved in producing inflammatory compounds in the body called prostaglandins. There are 2 types of COX, and COX-2 is the one most involved in pain and inflammation. That’s why a few years ago, there was a multi-billion dollar investment by big pharmaceutical companies in making drugs called COX-2 inhibitors, which turned out to be very good treatment for arthritis. The problem with those drugs is that at least one of them also turned out to make heart attacks more likely. That was really bad news. But the good news is that research shows that turmeric also inhibits COX-2 and does not seem to have any of those nasty side effects. Thanks again to nature’s pharmacy for a helper that does not harm. You can safely use it alone or in combination with other herbs for arthritis symptoms.

Turmeric also inhibits an immune compound in the body which can flare out of control in inflammatory disease states, called NF-kappa B, and this is probably one of the most important reasons I recommend it for the prevention of Alzheimer’s dementia.

And because this spice has been consumed in great quantities as a food over centuries, I have no concerns about its safety. I encourage you to get to know and love it in your cooking, and also to supplement with it if any of those health concerns especially concern you. It’s a real gift from nature, so enjoy it with gratitude!

To your health and wellness,

Want to Get Turmeric Benefits From Food?

Try one of these anti-inflammatory Clean Cuisine turmeric recipes:

Want to Get Turmeric Benefits From a Supplement?

Although we would not suggest taking curcumin (what is believed to be the most active compound in turmeric) in isolated form we do think turmeric supplements can be helpful if you aren’t up for cooking with turmeric on a regular basis. To get true benefits from cooking with turmeric you would need to consume approximately ¼ to ½ teaspoon of turmeric each day.

Since many people in India eat foods containing turmeric at almost every meal they are easily getting this amount on a daily basis. If eating that much turmeric isn’t your shtick, supplements might seem like an easy substitute to cooking with turmeric. The downside is that turmeric supplements are not well absorbed from the G.I. tract. However, research shows that by adding piperine (a compound found in black pepper) the absorption of turmeric is greatly enhanced. Interestingly, if you look at how cultures who consume turmeric regularly cook you’ll see the use of pepper and turmeric go hand in hand (ginger is also frequently paired with turmeric and ginger is known to help boost the absorption of turmeric also.)

One economical turmeric supplement we found containing piperine is the Vitacost Turmeric Extract Curcumin C3 Complex with “Bioperine,” a standardized piperine extract obtained from black pepper. You can purchase this extract online by clicking the image link below. 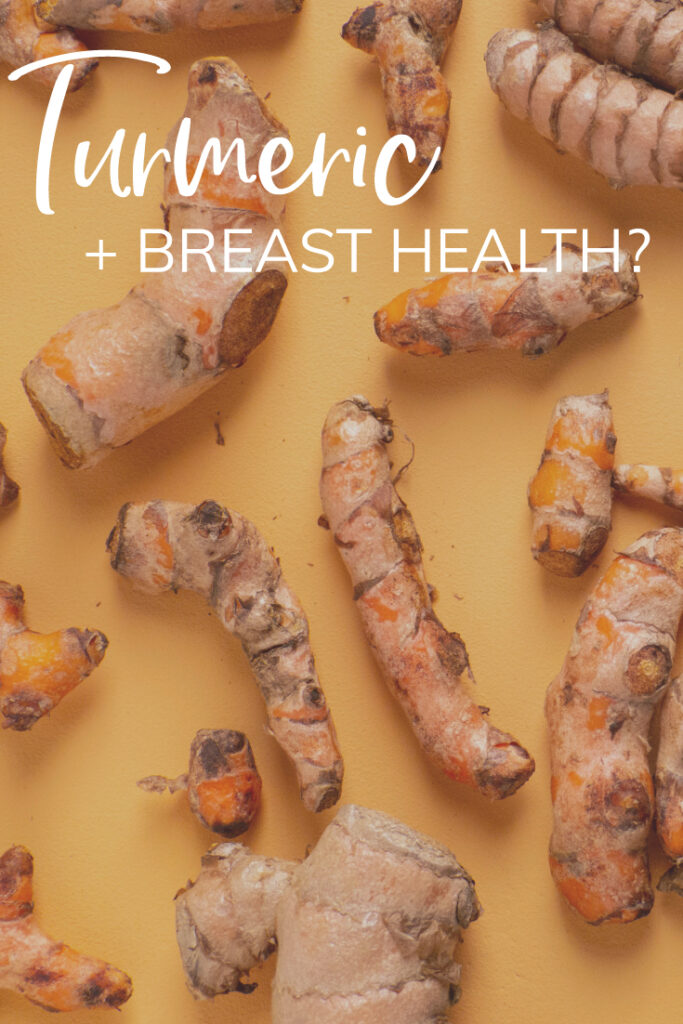 Find out more about Dr. Pendergrast’s dietary approach to cancer prevention in his book Breast Cancer: Reduce Your Risk with Foods You Love. Dr. Robert Pendergrast is a Board Certified physician and faculty member of the Georgia Health Sciences University (formerly the Medical College of Georgia).  He is an Associate Fellow in Integrative Medicine at the University of Arizona, the program founded and directed by Dr. Andrew Weil.   In addition to his writing and speaking appearances nationwide, Dr. Pendergrast currently cares for patients in Georgia and South Carolina at his Aiken-Augusta Holistic Health Center.