If you saw my recent post about the best plant-based milk alternatives you may have noted that wildly popular almond milk did not make the cut. That’s because the health benefits of almond milk are practically non-existent unless you are buying “whole” almond milk. Most almond milk brands are NOT made from “whole” almonds, but rather have been highly strained with sugars and other additives mixed in.

Clean store-bought “whole” almond milk brands DO exist though! See my three favorites at the bottom of this page.

I know almond milk is all the rage these days with clean eating enthusiasts, but the truth is if it is a highly strained almond milk that also has tablespoonfuls of sugar added to it, then it’s not really offering much in the way of nutrition.

I don’t want to bash name brands, but if you have been disappointed by the wateriness of the various almond milk brands you have tried, then that’s surely because they are not “whole” almond milk. It’s kind of like the difference between drinking whole milk and skim milk.

The problem with commercially produced almond milk is that the vast majority of brands contain less than 5 per cent almonds, the rest of the “milk” consists of water with some emulsifiers and added synthetic nutrients.

Here is the ingredients listed for a popular almond milk brand below:

This particular almond milk brand advertises that their product contains 50% more calcium than cow’s milk and that it is an excellent source of vitamin E. However, this type of marketing is deceiving to the consumer considering that this brand of almond milk does not naturally contain significant amounts of calcium or vitamin E; instead the almond milk has been artificially fortified with these synthetic nutrients.

What companies are doing to almond milk today is basically the same thing they did to flour years ago. Basically, they are processing a food and removing all of the good nutrition and then “fortifying” the food with synthetic nutrients. The health benefits of commercial almond milk are practically non-existent for the same reason that enriched white flour is also not healthy. If you have our Clean Cuisine book then you know we are against fortifying foods with synthetic nutrients. Your body will never be able to utilize a synthetic nutrient the same way it can utilize nutrients from whole foods. 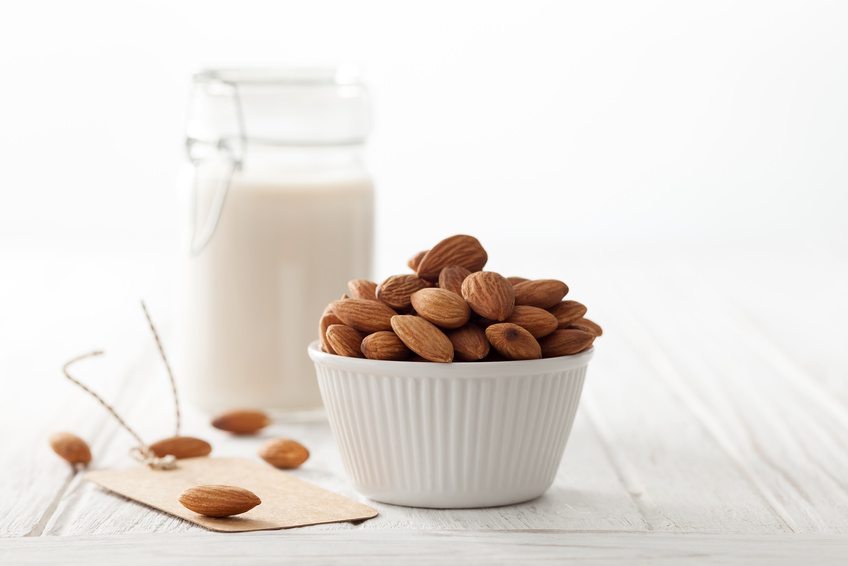 Health Benefits of Almond Milk When You Make It Yourself

As down as I am on most commercial almond milk, homemade almond milk done right is a completely different story.

If you Google “How to Make Homemade Almond Milk” you’ll see a number of different recipes pop up. The problem is almost every single homemade almond milk recipe requires a lengthy process of soaking the almonds overnight (or for up to 2 days), then using a high speed blender to process the almonds with water and finally straining the almond meal with a cheesecloth. The straining is the part I have a problem with. Straining the almond meal removes all of the nutrients! It is true that homemade strained almond milk does not have synthetic nutrients added and often contains less sugar than commercial versions, but that doesn’t make it a super nutritious milk alternative. It also doesn’t make it a rich and creamy alternative either. In other words, strained homemade almond milk is still going to have the consistency of skim milk. Not good.

There is a better, easier way…

The far-reaching benefits of whole almond milk verse conventional almond milk can be compared with the benefits of “whole” juice. The only juice we drink in our house is “whole” juice made from the “whole” fruit; conventional juice is just a processed food with the anti-inflammatory fiber removed. Once you remove the fiber from the fruit the sugar that is left behind is rapidly absorbed and can elevate insulin levels, promote inflammation, promote fat storage, etc. When you remove the pulp from “whole” almonds to make almond milk you are, in essence, turning almonds into a refined food to drink. Not nutritious.

There is simply no way around it, almond milk that is strained is just not as nutritious as “whole” almond milk.

The downside to “whole” almond milk? You will definitely need to shake it well just before using it, otherwise all of the stuff that is normally strained out when making conventional almond milk will all sink to the bottom. I like to store my almond milk in these mason jars because it makes them easy to shake. It keeps for about 3 days in the fridge, although our 15 year old son usually drinks it in one day 😉