Cinnamon Bun Recipe – This is the best and healthiest homemade cinnamon bun recipe ever! If you are looking for a healthy alternative to the traditional cinnamon roll recipe, then this is it.

The star ingredient that makes this cinnamon bun recipe gluten free (without sacrificing taste OR nutrition) is cassava flour. Cassava flour is a grain-free root vegetable flour made from yucca.

Here at Clean Cuisine we believe in making our food healthy, nutritious, but must also be delicious. We definitely don’t forgo flavor and this cinnamon bun recipe is no different.

There are quite a few steps to making this cinnamon bun recipe as it is with any traditional recipes. Be sure to print the recipe below and have it ready when you make these cinnamon buns.

To make these cinnamon buns healthy, we had to make just a few swaps. Our preferred ingredients are always gluten free, dairy free and refined sugar free. We eat this way to reduce overall inflammation and improve our gut, health and reducing aging.

Cassava Flour is a Nutritious and Bakes Like a Dream

Cassava flour is a great ingredient to use as an alternative to conventional whole grain flours such as whole wheat or spelt flour.

In many recipes it can be substituted in a 1:1 ratio for whole wheat flour. It’s also a great source of vitamin C (1/4 cup has almost 20% of your Daily Value), folate, magnesium, potassium and many additional nutrients.

So whether you are gluten free / grain free or not, you may want to consider adding cassava flour to your clean food pantry staples. Our favorite brand is Otto’s. You can learn more here and buy it here.

Most cinnamon bun recipes call for sugar and LOTS of it! However, by combining dates, a little extra virgin coconut oil, raw honey, water and cinnamon in a food processor you get a nutrient-dense but decadently sweet cinnamon date paste.

Thanks to this homemade cinnamon date paste,  these cinnamon buns are free from refined sugar! 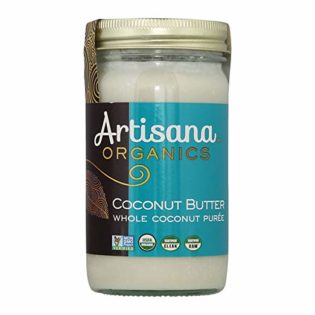 Thanks to Artisana Organics coconut butter, these even include a rich and decadent dairy free frosting to drizzle on top.

I know this gluten free cinnamon bun recipe clearly won’t taste like what you might get from Cinnabon, but I promise it won’t disappoint 😉 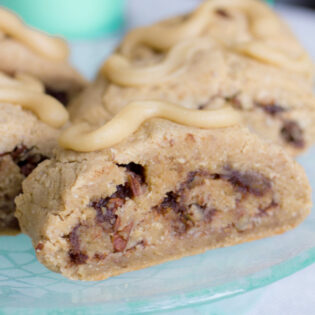 Our nutritious and gluten free Cinnamon Bun Recipe is ooey-gooey, sweet and 100% delicious without refined sugar and dairy ingredients.

Note: leftovers can be stored in a covered container in the refrigerator for up to 3 days or in the freezer for up to 3 weeks.

To avoid a watery consistency, make sure the almond milk you buy is “whole” and not excessively filtered. You can learn more about “whole” almond milk HERE. I like New Barn , Elmhurst and   Malk brands.

What You Need to Make Cinnamon Rolls

Can you freeze cinnamon bun dough before baking?

Yes, absolutely. You can make the cinnamon buns right up to the “baking and frosting” instructions above. Then, go ahead and place them on a pan or baking sheet and put them in the freezer for 1 hour. Once frozen, you can add them to a container for up to 1 month.

When you’re ready to bake the cinnamon buns, put the rolls in the fridge to defrost overnight. Then pull them out of the refrigerate and allow them to rest on the counter at room temperature. Then follow the “baking and frosting” instructions above.