This Recipe for Latkes was a staple growing up in my house, and something we still enjoy to this day. My mom learned to make them from her Polish grandmother, Julia Hawrsk. However, we never called them “latkes”, but instead, referred to them instead as “potato pancakes”. It doesn’t really matter what you call them, all you need to know is how to make them!

Both gluten and dairy-free, this Recipe for Latkes makes the perfect side-dish, or appetizer to the main course! Soft, savory, and delicious, this quick and easy recipe you just have to share with the family! Let’s get into the details.

Before we get into the recipe, let’s address the age-old question…are potatoes healthy?Potatoes are a starchy vegetable, and offer many health benefits!

Every time I hear someone say that potatoes are unhealthy or “fattening” I can’t help but cringe. In fact, part of the reason people think potato latkes are not healthy is because their main ingredient is potatoes! Potatoes—apples of the earth, are loaded with disease-fighting and anti-aging phytonutrients, antioxidants, vitamins, super “clean” and fiber-rich carbs as well as what can only be called a fat-fighting “miracle starch”.

If you have any skepticism about whether potatoes are in fact actually healthy, I urge you to read about the amazing health, nutrition and weight loss benefits of potatoes by clicking here.

While of course you should keep your diet diverse and filled with many different types of vegetables, potatoes most definitely have their place, and can lend a great deal of benefit to your health! So while a recipe for latkes may not sound like it fits into a clean living lifestyle, latkes can be an incredibly healthy food.

Now since we know that potatoes fit well into a clean eating diet, let’s go over how we made this Recipe for Latkes so healthy! Most latke recipes wouldn’t be all that bad, except for the fact that they often include unhealthy, processed flours, and fry the latkes up in canola, or other unhealthy oils. Click here to read about cooking with healthy oils!

Because of this, transforming latkes into a clean and healthy recipe only required a couple of easy swaps. Here’s what we switched out:

Swap Canola Oil for Unrefined Red Palm Oil: I use an antioxidant-rich and heat-stable unrefined oil. Unrefined red palm oil has become a definite staple ingredient in our kitchen lately. I not only love its rich, buttery flavor, but it is a more heat-stable cooking oil than extra virgin olive oil (thanks to the high saturated fat content). I find myself using it all the time when making soups, sauces, dressings, pilafs, breads and so much more!

Click here to read more about the benefits of palm oil!

Swap Bleached Wheat Flour for Gluten Free Flour: Gluten is the protein in foods like barley, wheat, and rye and can cause digestive issues, inflammation, and other issues in people who are sensitive to it. And while whole wheat flour should be a healthy option, the reality is most often very different, especially in America.

One of the biggest problems with gluten, is that it’s just simply not what it use to be. So no, a huge surge in gluten intolerances didn’t just randomly happen for no good reason. Gluten has been so genetically modified, treated with pesticides, and tampered with over the years, that it has become incredibly difficult to digest, and pro-inflammatory for a huge percentage of the population. Because of this, we opt for gluten-free in our recipes!

With these quick and simple swaps, latkes can easily transform into a recipe that not only tastes just delicious, but leaves you feeling great! Now, let’s get into our last couple of tips to make this recipe the absolute BEST latkes you’ve ever tried…

How to Make the BEST Latkes

In regards to nutrition and making the healthiest potato latkes, there are only two things I do want to suggest:

Buy Organic: Commercially-farmed potatoes are some of the most pesticide-contaminated vegetables that exist, and while they avoided the list this year, have been notorious for appearing on the Environmental Working Group’s “Dirty Dozen” list.  The good news is, potatoes are cheap and so buying organic should not break the bank.

All-in-all, you definitely want to go for organic russet potatoes here. Russet potatoes are high in starch, which is necessary to form pancakes that don’t fall apart.

Don’t Peel: Potato skins are rich in fiber and nutrients, so you definitely want to leave the peels on. You’ll notice in the recipe for potato latkes below that we ask you to keep the skins on–not only does doing so boost nutrition, it saves time! Click here for the nutritional value of potatoes with the skin!

Also, keep in mind that the only way to get a nice crispy crust on your potato latkes and to keep them from absorbing too much oil is to make sure your potatoes are very dry and the oil super hot.

And finally, you’ll want to find the perfect topping for your perfect potato latkes. When I was little, my absolute favorite combo was applesauce and sour cream. However, now that I no longer eat dairy-based sour cream the only way for me to get my sour cream fix is to make my own (click HERE for my nut-based sour cream recipe). I also love to throw a few chopped scallions on top. 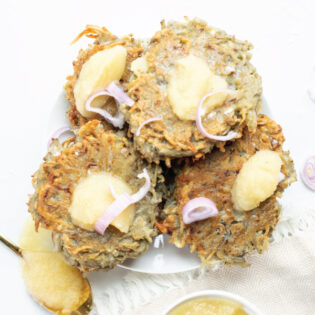 Both gluten and dairy-free, this Recipe for Latkes makes the perfect side-dish, or appetizer to the main course!

*If mixture is still watery after squeezing liquid from potatoes and adding additional ingredients, place mixture back in cheesecloth, and attempt to drain remaining liquid. If mixture is still not forming, add 1 egg + 1 tablespoon of gluten free flour at a time until mixture is firm enough to loosely hold together.

**When it comes to making potato latkes, people often ask if they should hand-grate their potatoes or use a food processor. Here’s the deal; hand-grated potato latkes do taste a bit better than those grated in the food processor, but the difference is marginal. So, it’s really a matter of personal preference.

Have You Checked Out the Clean Cuisine Dinners Cookbook?