You are here: Home / Recipes / Side Dishes / How to Make Potato Latkes
Jump To Recipe 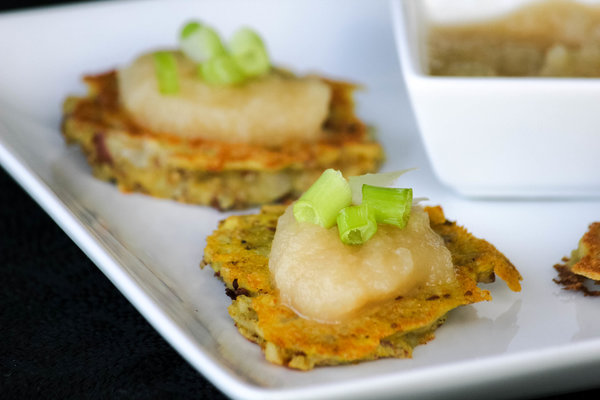 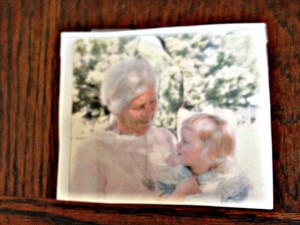 Me with my great grandmother, Julia Hawrsk

Growing up, savory homemade potato latkes were a staple food in my house. My mom learned to make them from her Polish grandmother, Julia Hawrsk (that’s me with my great grandma in the photo to the left.) The whole gang on my moms side of the family is Polish (my grandfather was born in Poland and came to the United States all by himself as a young boy) and although potato latkes are probably most well-known for being served at Hanukkah, I can tell you they are definitely a Polish thing too. However, we never called them “potato latkes” and referred to them instead as “potato pancakes”, which in Polish translates to “placki ziemniaczane.” It doesn’t really matter what you call them, all you need to know is how to make them (wink). 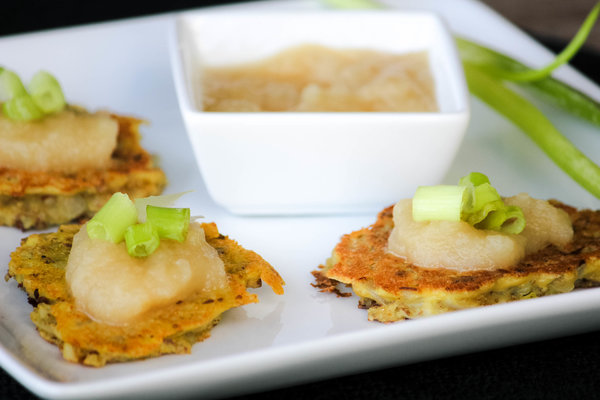 But are Potatoes Healthy?

Although they may not sound like they fit into a clean living lifestyle, potato latkes can be an incredibly healthy food. The recipe below is, for all practical purposes, the same recipe my mom learned from her grandmother. The only difference is, my great grandmother didn’t measure the ingredients. The oil and flour are the only two things I tweaked in the recipe:

1. I use an antioxidant-rich and heat-stable unrefined oil (my preference for this recipe is Unrefined Red Palm Oil) and I probably use less oil than Great Grandma Hawrsk did.

Every time I hear someone say that potatoes are unhealthy or “fattening” I can’t help but cringe. In fact, part of the reason people think potato latkes are not healthy is because their main ingredient is potatoes! Contrary to what most people these days believe, potatoes are actually an incredible source of nutrition. Potatoes—apples of the earth, or pommes de terre, as they say in France—are loaded with disease-fighting and anti-aging phytonutrients, antioxidants, vitamins, super “clean” and fiber-rich carbs as well as what can only be called a fat-fighting “miracle starch”.

If you have any skepticism about whether potatoes are in fact actually healthy, I urge you to read about the amazing health, nutrition and weight loss benefits of potatoes HERE.

However, in regards to nutrition and making the healthiest potato latkes, there are only two things I do want to suggest:

Which potatoes make the best potato latkes? You definitely want to go for organic russet potatoes here. Russet potatoes are high in starch, which is necessary to form pancakes that don’t fall apart.

Also, keep in mind that the only way to get a nice crispy crust on your potato latkes and to keep them from absorbing too much oil is to make sure your potatoes are very dry and the oil super hot.

And finally, you’ll want to find the perfect topping for your perfect potato latkes. When I was little, my absolute favorite combo was applesauce and sour cream. However, now that I no longer eat dairy-based sour cream the only way for me to get my sour cream fix is to make my own (click HERE for my nut-based sour cream recipe). I also love to throw a few chopped scallions on top. 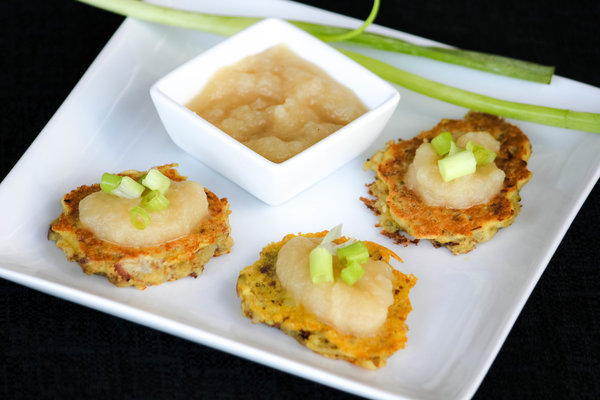 When it comes to making potato latkes, people often ask if they should hand-grate their potatoes or use a food processor. Here’s the deal; hand-grated potato latkes do taste a bit better than those grated in the food processor, but the difference is marginal. So, it’s really a matter of personal preference.

Have You Checked Out the Clean Cuisine Dinners Cookbook?