Gluten Free Pumpkin Pie – Not only is this super healthy gluten free pumpkin pie also dairy free, but it’s sweetened naturally. So, if you’re a huge fan of Libby’s Pumpkin Pie classic recipe then you will want to try this recipe. You definitely won’t have the sugar crash or gut discomfort that follows the classic recipe.

This gluten free Pumpkin Pie is our new go-to fall dessert and perfect to make ahead for Thanksgiving dinner. Plus, you can make it crust-less too.

Sometimes it is hard to recreate a favorite childhood recipe when you grow up. Lucky for me, Libby’s Famous Pumpkin Pie recipe is still in print on the back of their canned pumpkin puree. So, I can see exactly what was in the pumpkin pie of my childhood memories.

One thing is for sure though, what I ate growing up was not gluten free pumpkin pie. It certainly wasn’t dairy-free either and my gut could definitely tell.

Growing up my grandma made pumpkin pie pretty much year round, mostly just for me. Grandma made Libby’s Famous Pumpkin Pie recipe and a store-bought crust. And to this day, that is what I feel like a “real” pumpkin pie should taste like.

Pumpkin pie with mounds of whip cream right out of the can was one of my all-time favorite desserts. In fact, I’m almost certain pumpkin pie was the first pie I ever made. Needless to say, I am very nostalgic about this particular dessert, especially around Thanksgiving.

But, re-creating this to be a gluten free dairy free pumpkin pie was a necessity. Plus, why not completely overhaul the recipe to be naturally sweetened too!

My grandma wasn’t exactly into “health” food, nor did she like to deviate too much from the rules. Thus, the thought of not using the evaporated milk that the recipe on the back of Libby’s canned pumpkin puree called for surely never crossed grandma’s mind.

I guess if grandma were serious about her pie-making matters she’d have made her own crust, but store-bought crust was less hassle and nobody seemed to care if the pie was totally homemade or not, certainly not me.

I am pretty sure grandma didn’t even know what gluten was either, so the last thing she did was try to make a gluten free pumpkin pie. Who had ever even heard of such a thing?!

Boy have times changed… especially since we eat totally clean.

There are three major things that I changed when re-creating this gluten free Pumpkin Pie recipe for Thanksgiving… and year round! I switched up the crust to be a homemade crust that is super easy to make (no rolling pin). Then, I made a dairy free pumpkin pie filling that is so creamy and delicious. Last, we switched out the tons of refined sugar in Libby’s Pumpkin Pie recipe for natural sweeteners.

If I could find a store-bought crust that was ultra-healthy and tasted good I would absolute buy it. Trust me, I’m definitely not above taking short cuts in the kitchen! But, to date I haven’t found one that totally meets my standards for clean eating and good taste, so I have to make my own.

The recipe for the crust below is probably about as healthy a crust as you can get. The gluten free Pumpkin Pie crust is made with a delicious flour combination and no added sugar. Instead, the sweetness in the crust comes from organic pitted dates. It is easy as pie to make!

Libby’s Famous Pumpkin Pie recipe has been on the back of Libby’s canned Pumpkin labels since 1950 and it is undoubtedly a classic. Considering how nutrient-dense pumpkin is and how Libby’s Famous Pumpkin Pie recipe only has about 30 calories of sugar per serving the pumpkin pie of my youth really wasn’t such a bad choice after all (except for the terrible trans-fat laden store-bought crust!!)

Did you know? Pumpkin is ridiculously low in calories while also being very high in potassium, antioxidants vitamin A and beta-carotene. Plus, it has lots of disease-fighting phytonutrients.

My biggest issue with Libby’s classic recipe is that it calls for a whole can of evaporated milk. I just can’t bring myself to use that stuff. I decided to substitute organic coconut milk instead (read more about why I like coconut milk over dairy milk.) I’ll admit, I thought for sure my pumpkin pie would end up with a definitively undesirable tropical taste…but I am happy to say the traditional classic flavor is not compromised in the least.

I made a few tweaks to Libby’s Famous Pumpkin Pie classic recipe by adding my very own Pumpkin Pie Spice mixture.

Definitely do not skip the freshly grated ginger! I also eliminated the refined sugar in the filling and sweetened only with “whole” food pureed dates (or, for those of you who do not have a high-speed blender, unrefined coconut palm sugar will also work)….

Swap #3: Make It Sweet as Pie with ZERO Added Sugar in a High-Speed Blender

If you have a high speed blender, you can make the filling with zero added sugar. To do this, simply follow the ingredients for the filling in the recipe below using the pitted dates. If you just have a regular blender, use coconut sugar instead.

What is coconut palm sugar? Coconut palm sugar is an unrefined sweetener made from dried coconut palm nectar. So, unlike regular table sugar, it is not an empty calorie food. I wouldn’t classify it as a “superfood”, but coconut sugar is definitely a good option when it comes to natural sweeteners.

No Time to Make a Homemade Crust?

To make the custards, follow the directions for the pumpkin pie filling in the recipe below. But instead of pouring the filling into the unbaked pie crust, you simply pour it into 6, 4 ounce ramekins. You will still bake the custards at the same temperature and reduce the time to 30-40 minutes instead. If they are not quite done, continue baking them another 5 minutes or so. Serve the custards cold, just as you would the pie. 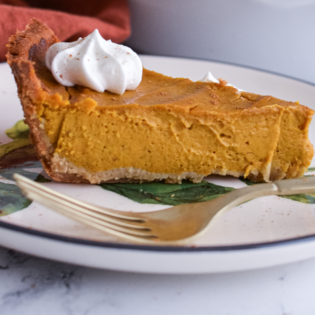 Loved Libby’s Pumpkin Pie? Then you will absolutely love that this gluten free pumpkin pie tastes just like the dessert and dairy-free too.

In my opinion, this gluten free pumpkin pie tastes best super cold. I like to refrigerate mine overnight and serve it cold with whipped coconut cream.