By the way, if you have our Clean Cuisine book, now would be a good time to read chapter 4 titled “Clean Carbs”, which is where you will find the scoop on carbohydrates as they pertain to health and weight management plus how to choose the cleanest, best carbs. Chapter 4 is long (it is 46 pages!) but we promise it will give you a very good understanding of carbohydrates.

But for now, let’s get back to whole grains… 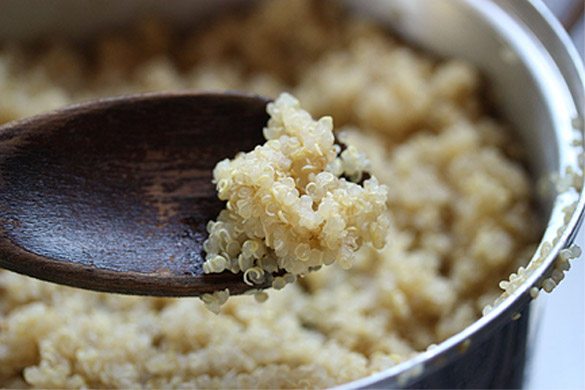 The short answer to whether whole grains are inflammatory is NO. And yes, they are healthy if they are eaten in their true whole and unrefined form, such as a bowl of brown rice or steel cut oats. Processed foods that are “made with whole grains” such as a whole wheat bread that might have a wee-bitty bit of whole wheat flour but also has about 20 other additives, processed oils and sugars is not healthy and is not at all what we are endorsing.

However, we acknowledge whole grains are a bit complicated these days and so we have put together a complete article discussing whole grains and their role in the inflammatory process in more detail (with references to mainstream medical journals) HERE.

We specifically address the concerns / rumors circulating about whether or not whole grains exacerbate the symptoms of inflammatory conditions, whether they contribute to obesity and whether they are helpful or harmful for gut health.

More is Hardly Ever Better, But Abstinence Is Not Necessary (Nor Optimal)

One of the biggest problems surrounding whole grains is the amount of whole grains eaten. We have found people typically approach whole grains with either a “more is better” mantra or complete abstinence, neither of which we support.

On one side of the table you have people who are jumping up and down about how we need to eat more whole grains; 6 to 12 servings a day! At the other side of the table we are told by Paleo enthusiasts that whole grains were not part of the human diet until as recently as 10,000 years ago, when agriculture was developed; this is the bunch at the table who like to say that because our early ancestors did not eat whole grains, we are not genetically designed to eat them and shouldn’t eat them either.

Uggghh. Confusion! If we were sitting at such a table here’s what we would have to contribute to the whole grain debate…

First, the average noncompetitive athlete living a moderately active life­style does NOT need to eat 6 to 12 servings of whole grains a day. If you ate this many whole grains you’d be getting anywhere between 600 and 1,200 calories a day and you would be pretty darn full and therefore have a hard time finding room for all the other healthful foods you should be eating.

NOTE: If you are a growing teenage boy who happens to also be a competitive athlete or a well-muscled competitive adult athlete, you might do just fine eating 6 to 12 servings of whole grains each day simply because your calorie needs are far greater than those of the average person.

If you are an average person who exercises moderately (anywhere from 2 to 5 hours a week), eating massive quantities of whole grains can actually shortchange you in the nutrition department because you’ll quickly meet your calorie needs but not have room left over for more nutrient-dense fruits and veggies. Although whole grains are absolutely healthful and have plenty of nutri­ents, calorie for calorie they are not nearly as nutrient-dense as vegetables (including starchy vegetables), fruits, and beans so you shouldn’t fill up so much on whole grains that you don’t have room left for other “super whole carbs” (we talk more about these in chapter 4 of the Clean Cuisine book.)

As for the Fred Flintstone–era grain-free, semi-Atkins caveman (or Paleolithic) diet, we don’t exactly consider early humans to have had the highest quality of lives; they certainly didn’t have a long life span! The reason early humans supposedly did not suffer from the degenerative dis­eases we acquire today (heart disease, arthritis, cancer, and so on) is mostly because they died so young. The Paleolithic diet was lacking in anti-aging phytonutrients because it did not contain enough fruits and vegetables. It was also a diet way too rich in animal protein. It is also interesting to note our ancestors were a lot shorter than we are today too. And besides, whether early humans ate grains is irrelevant because our goal in Clean Cuisine is not to go back to the good old days of living without modern conveniences. And how can we even be sure of exactly what our ancestors ate anyway? While they might not have eaten whole grains, we really don’t know exactly what their diet really looked like. Did they keep accurate “diet journals” dating back 2.6 million to 10,000 years ago? Doubtful. In addition, the animal foods our ancestors ate were distinctly different from the animals we eat today; their meat did not come from animals raised in feedlots and fed cheap and inferior foods; instead, they hunted animals that grazed on pasture and had significantly more omega-3 fat intake than the animals we eat today.

Anyway, instead of wasting time debating the Paleolithic diet, what we should try to do instead is move forward and learn how to optimize our health in today’s world. We should also analyze modern, well-documented nutrition studies that look closely at whole grain consumption and human health. When we look in the nutritional medical literature we find studies on real humans (not rats, not chimpanzees, not dogs, not cats) documenting that people who eat whole grains as part of their diet are healthier and slimmer than those who don’t. Cohort studies have also linked a diet rich in whole grains to a reduced risk of heart disease and diabetes and to the prevention of constipation and other digestive problems.

So in today’s world, a moderate amount of whole grains should absolutely be part of our diet.

You can read in more detail the science behind the anti-inflammatory, weight-loss and gut-promoting benefits of whole grains HERE, but we have also included the following quick-read version too:

There is no doubt that some people have issues with gluten and certainly celiac disease is real. However, we have a sneaking suspicion that glyphosates used on GMO wheat might have something to do with the increase in gluten sensitivity over the last few years. And, because “gluten-free” does not mean “glyphosate-free”, it could be the reason why some people who have eliminated gluten-containing grains still have a problem with other grains. To learn more about how to test for gluten-sensitivity and how to avoid glyphosate in all grains click HERE.

Easy, Healthful Ways to Add Whole Grains to Your Diet


Cooking with whole grains can be a fantastically fun (and tasty! adventure! Here are some ideas to get you started…

How Many Servings of Whole Grains Should You Eat a Day?

For the average person who participates in a moderate exercise program (such as what we suggest as part of the Clean Cuisine Challenge), 2 or 3 servings of whole grains a day is a good guideline. In general, men should eat slightly more whole grains than women because of their increased muscle mass.

Variety is the Spice of Life!

And finally, we think it’s important to eat a wide variety of different whole grains so we like to rotate our grains on a regular basis. The whole grains we include in our diet include: amaranth, barley, brown/ black and wild rice, bulgur, buckwheat, corn, kamut, freekeh, millet, oats and quinoa.

Ivy generally makes a big batch of whole grains with the rice cooker then stores them in the fridge for up to 3 days in a covered container. She then uses the grains for hot breakfast cereal, to make pilafs, to add to salads, to eat with vegetables, to add to soups, and so forth. When the grains are gone she starts all over and makes a new batch with a new whole grain.