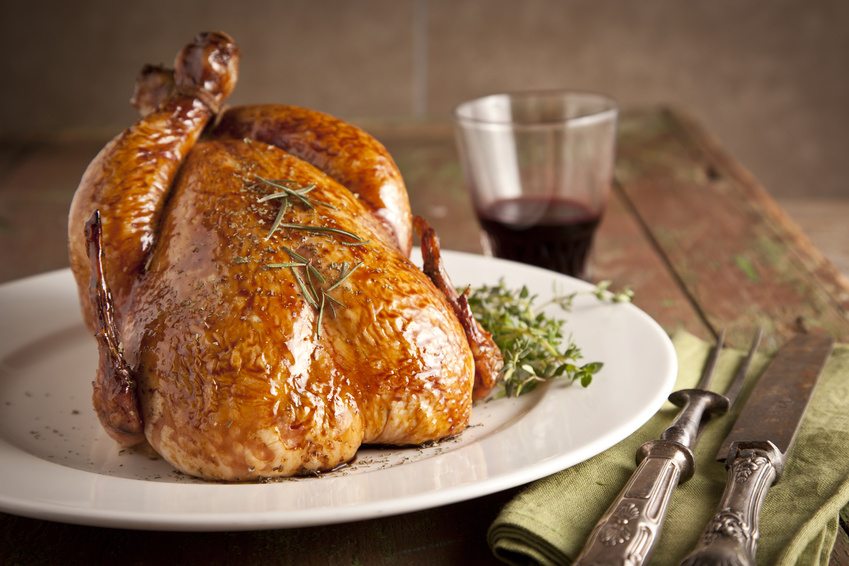 The good news is, whether you are most interested in having the healthiest Thanksgiving turkey on the block or simply want the best-tasting one, the same rules apply. Also, keep in mind that the same basic rules apply to buying the healthiest and best-tasting chicken too, so its a good idea to commit the following rules to memory for the rest of the year. Luckily, there are only four rules to follow…

The 4 Rules to Buying the Very Best Thanksgiving Turkey

Rule #1:  Find Out Where Your Turkey Was Raised

When it comes to choosing the best quality animal foods, it is becoming increasingly important to know the farm and farmer because, as you will read below, current labeling laws can be highly misleading. Without question, you will get the best Thanksgiving turkey if you make an effort to talk to your grocer or…bet yet…talk directly to the turkey farmer. You want to find out exactly how the turkeys were actually raised, including what they were fed as well as their living conditions.

For example, phrases like “free range” and “cage free” do not necessarily mean that your turkey has been living the happy, active and outdoor life you might envision. The USDA definition of “free-range” is pretty darn vague. In order to label their poultry “free-range or free-roaming”, “Producers must demonstrate to the Agency that the poultry has been allowed access to the outside.” Technically, the turkeys simply have to have a door out of their confinement pens, but they don’t have to necessarily walk through that door to meet the requirements. There is also absolutely no mention of whether the turkeys had access to green pasture, which is essential for the overall health (and taste) of the turkey meat. Poultry producers themselves seem to have no common standards on what the term “free range” even means and the guidelines are entirely open to interpretation.  Some producers interpret “access to the outside” as a small door on an end-wall of a 100 ft. long shed filled with un-caged birds moving about freely on a litter-covered floor. Others feel they are compliant with the “spirit of free-range” if their birds are outside in the open air and under the sun; even if their “range” is bare dirt, not pasture.

Instead of looking for “free range” or “cage free” birds, you want to choose a Thanksgiving turkey that was raised the good old-fashioned way, outdoors on fresh pasture. The turkey should have a diet consisting of  plenty of nutrient-rich and antioxidant-rich green grass with the  ability to forage for worms, bugs and insects (supplementation with omega-3 rich flaxseed meal and vitamins and minerals is ok, as long as these items are given as a supplement and do not make up the bulk of the turkey’s diet.) Not only will a turkey raised the good old fashioned way be more flavorful and moist, the turkey meat itself will be considerably healthier than conventional turkey meat. Keep in mind, the turkey’s diet and the way the turkey was raised will directly reflect the health of the turkey, which ultimately affects the health of the person who eats it. When a turkey is fed a nutrient-rich natural turkey diet and raised outdoors in a clean, fresh environment, it doesn’t need to be fed a steady stream of low-dose antibiotics (which is what conventionally raised turkeys are fed) to keep from getting sick.

The meat from a turkey that has been raised on pasture will have a much more favorable fat profile, meaning it will have considerably more anti-inflammatory omega-3 fats and much less pro-inflammatory omega-6 fats (Note: the omega-3/ omega-6 ratio in our food supply has HUGE implications on human health; getting more pro-inflammatory omega-6 fat directly contributes to the worsening of inflammatory conditions, promotes heart disease and decreases your body’s sensitivity to insulin, thus making it difficult to maintain a healthy body weight and even contributing to type 2 diabetes.) Thanks to their grass-rich diets, a pasture raised turkey will also have more nutrients than their conventionally-raised cousins, particularly more antioxidants vitamin E and vitamin A.

I have to admit, the sound of a “vegetarian-fed turkey” certainly has a nice healthy ring to it, but here’s the deal: turkeys are not meant to be vegetarians! Turkeys need plenty of green pasture, but just like chickens, they also need complete protein and they need to be able to forage for worms, bugs and insects. Raising a turkey on a vegetarian diet is a deviant diet from what the turkey would eat in the wild and the turkey simply will not be as healthy as it should be.  A vegetarian turkey is also much more likely to get sick and need antibiotics, or the turkey will simply be given low-dose antibiotics for a lifetime in order to keep illness at bay.  Inappropriately feeding animals a deviant diet of dry grain is a direct contributor to those animals developing pathogens such as E. coli (in cattle) and salmonella (in poultry).

While a “vegetarian-fed turkey” will not be fed other ground up animal parts (a good thing!), it is still a very misleading marketing gimmick to advertise a Thanksgiving turkey as being fed a vegetarian diet.

And of course a vegetarian turkey will be lacking the rich, deep and full-bodied flavor you would otherwise get from a turkey raised the way nature intended, on pasture.

Rule #4:  Know that “Organic” Is Not Necessarily the Best

An organic Thanksgiving turkey is second best to a pastured turkey. An organic turkey is still a better choice than a conventional one, but it still is not the absolute healthiest or best-tasting. The thing is, just because a turkey is organic does NOT guarantee it has been raised in a natural, healthful lifestyle. In fact, unless your organic turkey is also marketed as being “pasture raised”, then you can be pretty much assured it was not able to forage for worms, bugs and insects and did not have access to nutrient-rich green pasture, which means it was not fed a “natural” turkey diet. A comparison can be made to raising a child on a diet rich in foods like organic pretzels, organic cereal and organic crackers; I suppose it is better that the foods were organic, but those processed, empty-calorie foods are a far cry from optimal!

Selecting an organic turkey does however mean that your Thanksgiving turkey will have not been fed GMO grain, will have not be exposed to synthetic chemicals in their food and will also be free of antibiotics. The main problem with antibiotics given to livestock is that what does not kill the bacteria often makes them stronger and more likely to become resistant to modern medical treatment. In fact, studies have found that pathogens isolated from conventionally raised poultry are more likely to be antibiotic resistant than those isolated from organically raised birds. The Huffington Post published a great article HERE that goes into more detail on the widespread use and repercussions of “drugged-up Thanksgiving turkeys.” The fact that organic Thanksgiving turkeys are free from antibiotics definitely makes them a healthier choice than conventionally raised turkeys, but keep in mind it doesn’t necessarily mean they will taste any better.

Organic turkeys will also be free of hormones, but since hormones are not allowed in raising poultry, the whole idea of marketing a Thanksgiving turkey as “raised without the use of hormones” is somewhat misleading to the consumer because it implies that conventional turkeys have hormones, which they don’t. Technically, such a claim is not allowed to be made unless followed by a statement that says, “Federal regulations do not permit the use of hormones in poultry.”

What About a Heritage Turkey?

A heritage turkey is one of a variety of strains of domestic turkey which were once almost extinct. These birds have exceptionally healthy immune systems and are much easier for farmers to raise on pasture, so they are always raised outdoors with plenty of sunshine, access to pasture and fresh air. However, the farmers who mass-produce heritage turkeys do not raise their birds entirely the way nature intended and they are still fed a primarily vegetarian diet consisting of corn, soybean meal and supplemental vitamins and minerals. The problem is, this “vegetarian diet” has way too much pro-inflammatory omega-6 fat and way too little anti-inflammatory omega-3 fat and it does not consist of the natural diet a heritage turkey would get in the wild. So, if you do buy a heritage turkey, you want to make sure you get one that is raised primarily on pasture.

As for taste, the foodies will insist a heritage turkey is the best-tasting. Prized for its succulent meat and rich-tasting, delicious flavor, the heritage turkeys are a favorite with gourmet enthusiasts. Unlike conventional birds, which are typically injected with a solution of water, salt, preservatives and flavorings during the packaging process, a heritage bird is all natural and does not contain additives.

Is Kosher Turkey a Good Choice?

A kosher turkey is not healthier than a conventional turkey from a nutritional standpoint, but it does taste better. That’s because the koshering process, which involves soaking the meat in brine and then rubbing it with coarse salt (hence, “kosher salt”), accounts for what many consider the superior flavor, texture, and juiciness of kosher turkey. While I don’t buy kosher turkey for our Thanksgiving meal, I do always brine my turkey and it definitely makes a huge difference.  Alton Brown has a great basic recipe to both brine and roast the perfect Thanksgiving turkey HERE.

And finally, I just had to share my complete Clean Cuisine Thanksgiving menu, which I developed back in 2009 for a special feature assignment for Natural Health magazine and Dr. Oz. The entire menu was to be gluten-free and dairy-free and also incorporate 10 of Dr. Oz’s favorite superfoods (such as coconut, kale, pomegranate, etc.) The assignment was definitely a challenge (especially working in the superfoods!), but the meal was so incredibly delicious that it has become our staple family Thanksgiving feast ever since. Click HERE to see the full menu and recipes.

Who says pumpkin spice can only be enjoyed in fall