When I first began cooking with spaghetti squash, I used it merely as a noodle replacement. And while this is delicious, I was still naive to just how versatile spaghetti squash really is! That is, until I discovered these Spaghetti Squash Hash Browns..

Due to it’s mild, neutral flavor, spaghetti squash can easily be used in both savory, and sweet dishes! From noodles, pizza, and hash browns, to puddings, brownies, and curd, there are endless possibilities!

I initially got the idea for spaghetti squash hash browns after seeing a drastic improvement in symptoms upon giving up potatoes. Potatoes are by no means bad, and not something everyone needs to stay away from. However, with leaky gut, SIBO, and newly diagnosed Crohn’s Disease, they simply weren’t working for me any longer.

In an attempt to recreate all of the foods I love in a gut-friendly way, I experimented with turnips, parsnips, and rutabaga, and finally landed on spaghetti squash as the perfect replacement for this recipe!

THE BENEFITS OF SPAGHETTI SQUASH

Spaghetti squash is high in antioxidants, especially beta-carotene, and vitamin C. These have both been studied to protect against disease formation, as well as protect cells, and DNA.

Spaghetti squash is also high in fiber, which is vital for your digestive health. According to the Dietary Guidelines for Americans, an adult should be getting in between 28-34g of fiber per day, depending on age, and gender.

Spaghetti squash offers around 2g of fiber per cup. While this may not sound like a lot, but with between 90 and 95% of it’s weight coming from water, you’ll likely be eating much more than only one cup.

Spaghetti squash offers a generous dose of vitamin B6, vitamin C, and manganese, among others, which are essential for proper brain and nervous system functions, and more.

All of these reasons combined mean spaghetti squash is a nutrient-dense, incredibly beneficial food to add into your diet!

With all these benefits, there’s no reason not to give spaghetti squash a try!

With only around 15 minutes of hands-on time, you can have these delicious, crisp, copycat hash browns in no time. Let’s get into the recipe! 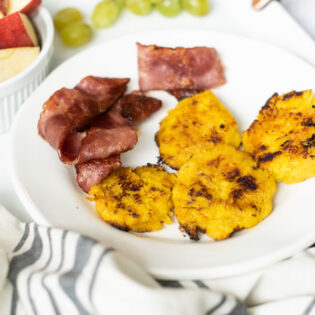 *You can usually gauge when your spaghetti squash is getting close to being thoroughly cooked in the oven by paying attention to the skin. A great indicator is when the skin begins to brown, and becomes tender and/or cracks from the heat. Removing before fully tender will result in crunchy hash browns.