Oatmeal Cream Pie – If you grew up eating Little Debbie’s Oatmeal Cream Pies like I did, then you know the nostalgia of these sweet and chewy cookies. Just as delicious, but free of gluten, dairy, and refined-sugar, my Oatmeal Cream Pie Recipe is the perfect healthy swap for this childhood treat.

Easy to make, and a great dessert to store in the fridge for quick snacks when you need that sugar-fix, this recipe is one you just have to try out for yourself! Ready for the full recipe? Let’s get into it!

If you’re anything like me, I absolutely hate portioning out my food. Before I switched to a clean diet, I was all about portion sizes and calorie counting, and to be honest, it was miserable! It made eating feel restricting, and really took the enjoyment out of food. Yes, I was eating what I wanted, but only in very small amounts, and was always left wanting more. If I did give into eating until I was satisfied (which was usually after an entire pack of cookies or the whole bag of chips), I was left feeling guilty, and definitely suffered the digestive issues and lethargy that inevitably followed.

After switching to a clean eating diet, not only did my refined-sugar cravings go away, but I stopped relying on portion sizing and calorie counting. Instead, I began trusting my body to guide not only my food choices, but how much I ate as well. Nowadays, I NEVER ignore a craving, and most definitely do not limit or restrict my portions or caloric intake. Clean eating really is all about swaps, not restriction.

Like I just talked about, I really do believe that clean eating is all about swaps instead of restrictions. Yes, food is fuel for our bodies, and in my belief, medicine as well. However, food is much more than that! Food should be something to enjoy and look forward to. It should be full of flavor and variety, and totally crave-worthy!

This Oatmeal Cream Pie Recipe, in my opinion, totally checks all those boxes! While oatmeal cream pies are actually very easy to revamp into a healthy recipe, you might not think so if you looked at ingredient list for the Little Debbie Oatmeal Cookies. With too many ingredients to count, including artificial flavors, dairy, gluten, carrageenan, dyes, and more, Little Debbie Oatmeal Cookies aren’t exactly the epitome of health. Thankfully, most of these ingredients are totally unnecessary, and really just cheap replacements for real, whole food flavor!

Like I referenced above, a homemade Oatmeal Cream Pie Recipe like this one requires very few vital ingredients. Here’s a rundown:

It’s probably quite obvious that an oatmeal cream pie recipe includes oatmeal! The good news is, oatmeal is highly nutritious, and this part of the recipe doesn’t need a swap!

Contrary to popular belief, it’s not desserts and sweets in-and-of-themselves that are unhealthy, it’s the refined sugar in them that is! There are tons of natural sweetener options that are great measure-for-measure swaps for refined cane sugar.

In this recipe, I went with coconut sugar. Coconut palm sugar is an unrefined sugar, meaning it is not an empty calorie. Although we wouldn’t necessarily classify it as a “superfood”, coconut palm sugar actually does have nutrients including amino acids, potassium, magnesium, zinc, iron and B vitamins. Coconut palm sugar also does not appear to negatively affect blood sugar levels in the same way that cane sugar does. We feel it is the ideal replacement for cane sugar and tastes and bakes very much like brown sugar. It also dissolves well in both hot and cold liquids and can be used as a 1:1 replacement for cane sugar.

The butter in oatmeal cream pies gives them that creamy and buttery flavor we all know and love. However, butter can easily be swapped for dairy-free options such as coconut oil, vegan butter, or ghee (not dairy-free, but low-lactose), all measure-for-measure.

While the choice is yours, I went with a vegan butter option to maintain that rich, buttery flavor.

While most recipes call for all-purpose flour, I opted for a gluten-free, measure-for-measure option. Why do we choose a gluten-free lifestyle? Well…it’s most definitely not to fit in with a fad, nor is it because gluten is unhealthy in-and-of-itself.

One of the biggest problems with gluten, is that it’s just simply not what it use to be. So no, a huge surge in gluten intolerances didn’t just randomly happen for no good reason. Gluten has been so genetically modified, treated with pesticides, and tampered with over the years, that it has become incredibly difficult to digest, and pro-inflammatory for a huge percentage of the population.

While I went with an egg as the binder for this recipe, many people avoid eggs due to intolerances, allergies, or dietary preferences. Because this recipes calls for only one egg, you can easily swap it out for an easy egg substitute for baking.

Now since we’ve talked all about this soft and chewy Oatmeal Cream Pie Recipe, let’s get into the full recipe! 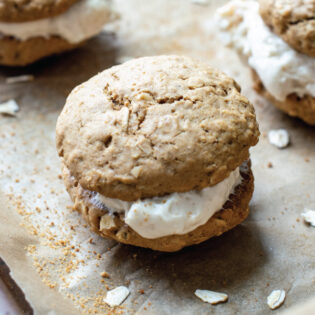 Just as delicious as the pre-packaged version, but free of gluten, dairy, and refined-sugar, my Oatmeal Cream Pie Recipe is the perfect swap!