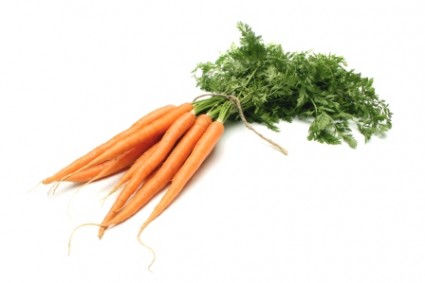 Carrots Nutrition 101 – Are Carrots Good for You?

To me this question is like asking “Is salad healthy?” I would think everyone would answer YES! But thanks to a lot of conflicting information surrounding the glycemic index / glycemic load of carbohydrate-containing foods a lot of people are apparently still confused about carrots nutrition. I thought I’d address this issue since one of Andy’s patients just sent us an email wanting to know “Are carrots good for you?”

YES! Carrots are Good for You!

I don’t think anyone can argue that carrots are an excellent source of nutrients. Carrots are incredibly rich in both alpha-carotene and beta-carotene (which converts into vitamin A in your body) plus they have a ton of fiber, lots of anti-aging and disease-fighting phytonutrients, a hefty dose of potassium and even a sprinkling of calcium and magnesium.

Carrots are good for you whether you eat them cooked or raw, but interestingly, cooking carrots actually makes the nutrients more bioavailable…which is a fancy way of saying it’s easier for your body to use the nutrients in carrots if the carrots are cooked. Even more interesting is that the fat-soluble carotenoids in carrots are best absorbed by your body if you eat the carrots with a bit of fat (same thing for tomatoes, the lycopene in tomatoes is best absorbed with some fat…which is why it’s not a good idea to eat “fat free” tomato sauce!) Besides carrots and tomatoes both taste better with a bit of fat anyway, so this shouldn’t be too difficult to do.

But, Do Carrots Make You Fat?

You can read the long-winded scientific answer below if you want but the Cliff’s Note version can be summed up in one simple sentence. Eating carrots will not make you fat.

I’m pretty sure it was The South Beach Diet that was really responsible for popularizing the myth that carrots were “fattening” because the diet encouraged people to be conscious of the glycemic index of the carbohydrate-containing foods they ate.

What is the Glycemic Index?

The theory behind the Glycemic Index/ Glycemic Load is simply to minimize insulin-related problems by identifying and avoiding foods that spike blood sugar levels. Eating foods that are converted to sugar quickly and that cause a rapid rise in blood sugar will cause your pancreas to secrete large amounts of insulin that can, over time, lead to loss of sensitivity to insulin (called insulin resistance). Insulin resistance is associated with obesity, high blood pressure, heart disease, elevated blood fats (triglycerides), and an increased risk of type 2 diabetes.

Benefits of avoiding foods that spike blood sugar include:

How Scientists Determine the Glycemic Index:

Measuring the Glycemic Index Has a Big Flaw:

One major drawback to measuring the glycemic index of foods is that the tests are not performed using typical portion sizes. For example, carrots rank high on the glycemic index but the typical 3 ounce serving of carrots contains just 9 grams of carbohydrates and 2 grams of fiber (7 grams of net carbs). It’s not accurate to say that carrots have a high GI because it’s practically impossible to eat 21 ounces of carrots (the amount needed to obtain the 50 grams of net carbs used to measure the GI of a food).

The Quantity of Carbohydrates You Eat at Each Meal Affects Your Blood Sugar Levels:

The problems with the glycemic index are what led scientists to come up with the idea of glycemic load. The glycemic load ranks foods according to actual carbohydrate quantity (typical portion-size), rather than how fast a 50g amount of carbohydrates raises blood sugar levels in a laboratory setting of force-fed volunteers.

I’m not a fan of the Glycemic Index

Like the misleading Nutrition Facts, the glycemic index drives me nuts for three main reasons:

Major Pitfalls of the Glyemic Index

1. It doesn’t take the nutritional value of the food into consideration. Just because a food has a low GI does not make it a nutrient-dense food! According to the Glycemic Index the following foods are equally healthy choices simply because they have similar GI ranks:

2. Too complicated!! Doing calculations for everything you eat and memorizing food charts is NOT practical.

So Forget About the Glycemic Index!  Writing all that science makes me hungry so I’m off to make my easy carrot apple soup recipe.

If you insist on learning more about the glycemic index try the book below from Amazon.com but understand the whole foods Clean Cuisine approach outlined in our book is the way to go:

One thing that bothers us the most is when junky p

It all starts in the gut. To feel better, I had to

Here at Clean Cuisine, we believe in eating clean,

If you like banana bread, you will LOVE these bana

If you’re looking to spice up your dinner tonigh