As much as we love the green smoothie trend, this blackberry smoothie made with hidden cauliflower is incredible. I am beginning to think a new smoothie trend could soon emerge!

This is our very first cauliflower smoothie recipe. So, I can’t say for sure that substituting cauliflower for greens will always work. It could just be beginners luck. But still, I am VERY encouraged…

No Greens On Hand, Try a Cauliflower Smoothie!

Cauliflower has been the “it” vegetable of the year. I never would have never thought to make a cauliflower smoothie had I not ran out of greens this past weekend. Some things just happen for a reason.

When it comes to making cauliflower smoothies, I do think frozen cauliflower is the way to go.

I tested this recipe twice. The first time I used frozen cauliflower because that was all I had on hand. It turned out perfect. The second time I tried fresh cauliflower and it just didn’t taste nearly as good.

I think that because frozen cauliflower is blanched just before it is frozen, it mellows out the flavor. It also makes for a better texture when pureed into a smoothie.

And let’s not forget, variety is the spice of life!

Ok, time to try something new…. 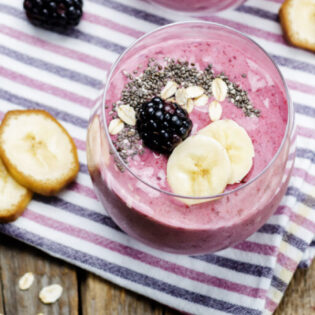 This hidden cauliflower Blackberry Smoothie Recipe is creamy and delicious. I may be making more cauliflower smoothies!

In a high-speed blender, like this one from Luvele or this one from Ninja, add the ingredients in the order listed above. Process on high speed until smooth and creamy. Serve cold.

Recipe can also be frozen into popsicles.

If you liked the Blackberry Smoothie Recipe, be sure to check out my 4-ingredient Blackberry Popsicles  and the quickest, healthiest and easiest Blackberry Jam Recipe ever.