Nutrition Advice / Shake Up Your Cooking with Real Salt!

We’ve all been told we need to cut salt (sodium) from our diets – and that too much salt can lead to serious medical issues. Scary stuff, right? Well, the truth is you and I do need salt if we want to remain healthy – but we do not need the overly processed white crystals we casually shake over our corn on the cob and we don’t need all that sodium found in processed foods (we don’t need the processed foods either, but that’s another article…)

Not only does your body need salt for brain function, to transmit nerve impulses, muscle contraction, electrolyte balance and many other functions, but there’s an all-natural salt available that comes packed with great flavor and more than sixty important trace minerals, too. I’m talking about Real Salt

.  But, before we delve into what makes Real Salt different than table salt let’s chat a bit about why salt has gotten such a bad rap…

Excess sodium from salt is bad because it causes your body to retain fluids; the fluids remain in your bloodstream and force your body to work harder, thus increasing blood pressure.

Your blood pressure is a very good indication of the health of your cardiovascular system. Unfortunately, almost one in three Americans has high blood pressure (hypertension.) Hypertension is a major risk factor for heart disease and stroke. After the age of sixty-four about 80 percent of Americans show a greater tendency toward high blood pressure because the elasticity of their arteries decreases.  A study of blood pressure published in the New England Journal of Medicine tells us that for every ten points your systolic blood pressure (the top number) rises above 120, your risk for heart attack death increases by an astonishing 30 percent. (1) The diastolic (bottom number) only has to rise by five points over 80 to create the same risk. Stroke risk also rises radically with elevated blood pressure as well.

If you are suspicious of salt you should be because it is absolutely true Americans consume far too much sodium. However, Americans are not getting excessive amounts of salt because they are over-salting their salads, vegetables, beans, whole grains and other Clean Cuisine foods. Americans are getting too much salt in their diet from eating an excessive amount of salted deli meats, canned and packaged convenience and processed foods (remember, salt is a preservative, so it is ubiquitous in processed foods!) and restaurant meals. If you look just at packaged foods you’ll see many contain more than half of the recommended sodium intake for the day; that “hidden” salt accounts for more than 75 percent of the average American’s bloated daily intake of sodium. The recommended daily allowance for adults ages 40 and up is 1,500 mg, but each day most of us down more than 3,400. Americans now consume 55% more sodium than we did in the 1970’s. But again, over-salting unrefined Clean Cuisine whole foods is not the root of the problem.

Salt is Not the Only Factor in High Blood Pressure

While excess sodium is absolutely a contributing factor to high blood pressure, it is absolutely not the only factor. In fact, salt reduction studies show many inconsistencies. Furthermore, there are definite genetic differences in salt sensitivity. In fact, only about 10% of the population is particularly salt sensitive, with African Americans being the most sensitive. This means if you have high blood pressure you can’t just expect to eliminate salt from your diet and that be the end it. There’s a lot more to achieving a healthy blood pressure than shaking the salt!

The best way to keep your blood pressure healthy requires a multi-faceted approach including achieving and maintaining a healthy weight (eating a Clean Cuisine diet will help you do this), exercising regularly, avoiding excessive amounts of alcohol, not smoking, reducing stress, substantially increasing your intake of fruits and vegetables (potassium, calcium and magnesium in fruits and vegetables all help lower blood pressure) and avoiding processed meats and processed foods. If you take medications (including birth control pills) you should be aware of whether an increase in blood pressure is a side effect of your medication. Note that none of these recommendations mean you need to stop salting your Clean Cuisine whole foods!

Andy was quoted in the Palm Beach Post on an article on salt a while back and here is a tid bit from that article… “I’m not saying that salt is totally safe,” says Dr. Andy Larson, medical director for JFK Medical Center’s Bariatric Wellness and Surgical Institute. “But are we sure that we want to single out salt when the real problem is the junk calories in the food – the processed flours and unnecessary vegetable oils that have the calories?” Larson offers the example of a saltine cracker. “The cracker is made out of enriched flour, some type of vegetable oil that we don’t need to be eating more of, a couple of flavoring agents and salt. For the majority of the population, the salt is the least harmful substance in that cracker.”

Keep in mind, the building blocks of a blood pressure-friendly, figure-friendly and overall healthy diet are vegetables, legumes (including soybeans and other beans), fruits, vegetables, nuts, seeds and whole grains…all high fiber plant foods. You can also eat fish and high quality animal foods (such as grass fed beef. pastured chicken, eggs from pastured chickens, etc.) in moderation. And you can also absolutely safely put some salt on all of these foods too.

The Clean Cuisine diet we recommend encourages moderation and healthy balance. Andy and I feel strongly that it’s important to find a good overall plan that’s healthful but also enjoyable and sustainable. And if that means adding a little salt to your overall healthy Clean Cuisine whole foods diet then go for it.

All Salt is Not Created Equal

Although we are not anti-salt we do hope you’ve put the umbrella-totin’ Morton’s gal out to pasture. She’s highly processed and simply not good for you. It’s time to give Morton’s salt the shake and pick up a new salt…

The truth is, like calories, all salt is not created equal. Whether they have the same number of calories or not a slice of carrot cake is simply not the nutritional equivalent of a serving of raw walnuts. And processed salt is not the same as unrefined. But just as it is difficult to navigate the packaged foods world in search of truly healthy Clean Cuisine-approved products, it’s becoming equally as difficult to figure out what’s what in the salt world. For example, did you know that all salt could technically be considered “sea salt”? Some salt is harvested from current oceans, some from dead seas, and some is mined from ancient sea beds, but the sea is ultimately the source of all salt. Sea water usually contains more than 60 essential trace minerals, but most salt producers today remove these high-profit minerals and sell them to vitamin manufacturers before selling the remaining cheap demineralized “table salt” to you. The problem is, when the trace minerals are removed you end up with a bitter flavor that many producers try to mask with chemicals or even sugar. Even worse, when you consume chemically treated or demineralized salt, your body’s mineral balance doesn’t respond optimally. So it is true that “table salt” is not exactly healthy, but it’s also not at all the same as “Real Salt

So, why Real Salt? “Real Salt

” is a United States company that packages salt in its natural state—– without additives, chemicals, or heat processing of any kind. Real Salt’s unique pinkish appearance and flecks of color come from more than 60 naturally occurring trace minerals. 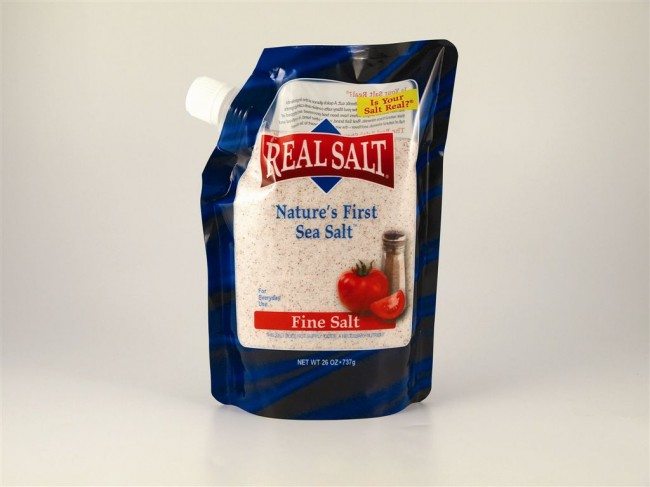 For a while I was forking over a lot of money for Himalayan salt but after discovering Real Salt I realized the only main difference between the two was geography. Real Salt comes from the USA (Redmond, Utah), while the Himalayan deposits are in and around Khewra, Pakistan. There are 17 different mines supplying the Himalayan brands, and some have more modern standards than others. Generally, “Real Salt

” is half the cost (it doesn’t have to be shipped from Pakistan!) of Himalayan salt and you know you can always trust the quality, processes, and labor policies that bring “Real Salt” to your kitchen. Geologically, the Himalayan deposit is very similar to “Real Salt”; they both have the full spectrum of minerals and both can be considered crystal salts. Tasted side by side, Real Salt is a bit sweeter, while Himalayan tends toward an earthy flavor.

Also, unlike many fancy “sea salts”, Real Salt is very affordable and easy to find too— you can pick up Real Salt just about everywhere you shop. Look for it at Whole Foods, Super Target, Meijer, Giant Eagle, ACME, Walmart, Lunds & Byerly’s, HEB, Central Market, your neighborhood health food store or online

One of the very best dietary changes you can make towards improving your blood pressure and health in general is to shake the processed foods (which are also loaded with refined salt) and start preparing your own fresh and plant-rich, fruit and veggie forward Clean Cuisine whole foods meals. And yes, you can add a few shakes of Real Salt

to these foods without worry. Oh! and if you layer your salt as you cook you’ll not only dramatically improve the flavor of the food but in the end you’ll actually use less salt. I rarely ever add salt to any recipe all at once; instead I layer and taste as I go. You must taste as you go. Plus, isn’t tasting as you go part of the fun of cooking 😉