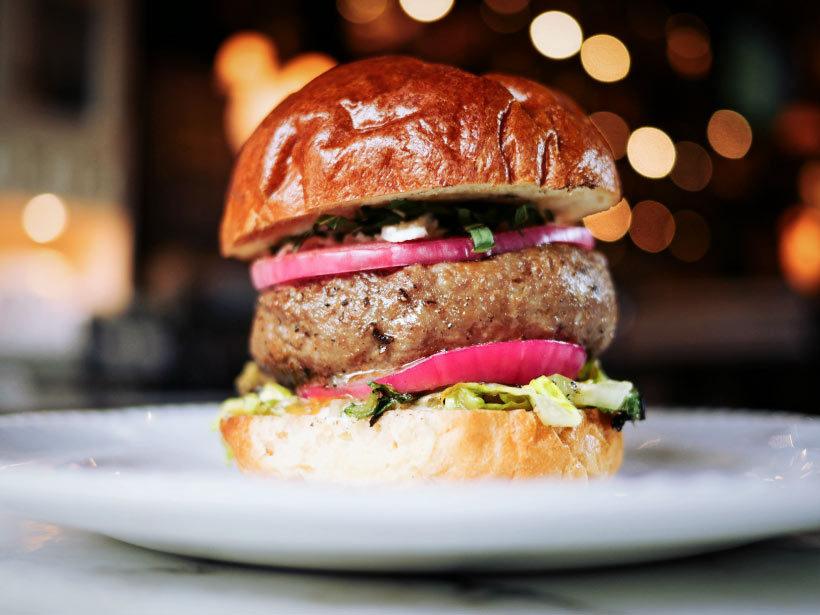 A few months ago we went boating with a group of friends to a place called Peanut Island. The island isn’t really as exciting as it sounds but it does have picnic tables and BBQ facilities so it’s a great place to bring all your friends, grill it up and leave (better than getting your house all messy…especially when you have a bunch of kids in tow!)

We sort of did a potluck style picnic where everybody brought one thing. My brother-in-law is always very nervous that I am going to slip him some wheat grass so he generously brought beer and hotdogs 😉 I offered to bring grass-fed lamb and tabouleh so I could make my Greek style grass fed lamb burger recipe.

Grass-fed meat is superior to grain-fed in every way possible. If you are serious about clean eating, you definitely need to be serious about choosing the highest quality animal foods.

Although you would naturally assume organic animal foods would be the “cleanest” and most nutritious source, this isn’t necessarily true. Eating organic animals in comparison to conventionally raised animals will lessen your exposure to pesticide residues, synthetic hormones, antibiotics and toxins in general. Yet, when it comes to buying the “cleanest” and highest quality animal foods it’s really essential to think about going beyond organic and consider the diet of the animal. This is because the animal’s diet reflects the health of the animal, which ultimately affects the health of the person who eats it.

Grain fed animals and the milk from grain-fed animals is less nutritious than grass-fed animals. For example, compared with grass-fed meat, grain-fed meat has only one-quarter as much vitamin E and one-eighth as much beta-carotene. And, since the composition of the fats present in animal foods directly reflect the foods the animals consume, animals raised on conventional, commercial grain feeds (even organic grain feed) have less than desirable fat profiles.

Too much omega-6 fat and not enough omega-3 fat can disrupt the body’s immune system, exacerbate inflammatory conditions such as asthma and allergies, decrease the body’s sensitivity to insulin and therefore increase the risk of type 2 diabetes and even contribute to obesity and heart disease.  Eating conventionally-raised animals containing high amounts of omega-6 fat is one of the major contributing factors as to why our omega fat ratio is so out of whack. The fat in grass-fed animals is much closer to a healthy balance.

Keep in mind, it really doesn’t matter whether the animal is fed ordinary grain, genetically modified grain or organic grain. Feeding large amounts of any type of grain to a grazing animal will negatively affect the quality of the animal’s meat….and milk. So, while organic meat may be free of unwanted toxins, it is still nutritionally inferior to grass-fed meat. Also, it is important to point out that farmers who raise grass-fed animals (such as U.S. Wellness Meats) raise the animals in the healthiest manner and under the cleanliest and most natural of conditions.

What’s the Deal with Adding Tabouleh to the Grass Fed Lamb Burger Recipe?

I added the tabouleh for 2 reasons: 1) flavor and 2) to reduce the meat. Flavor first, tabouleh really does taste amazing mixed with ground lamb (or ground beef or bison). The tabouleh gives a lot of flavor but also helps keep the meat super moist. And, because the tabouleh is adding “oomph” or substance, it helps you eat less meat! It’s a little trick I wouldn’t let your meat loving pals in on, but it works.

You can reduce the lamb by a good solid ounce simply by adding tabouleh. And since tabouleh is entirely plant-based and made from all sorts of healthy stuff like tomatoes, bulgar wheat, parsley, lemon juice and olive oil it’s a great way to eat clean and health your grass-fed lamb burger up!

You really don’t need to be exact about measuring this or that. Use the below guidelines as just that, guidelines.