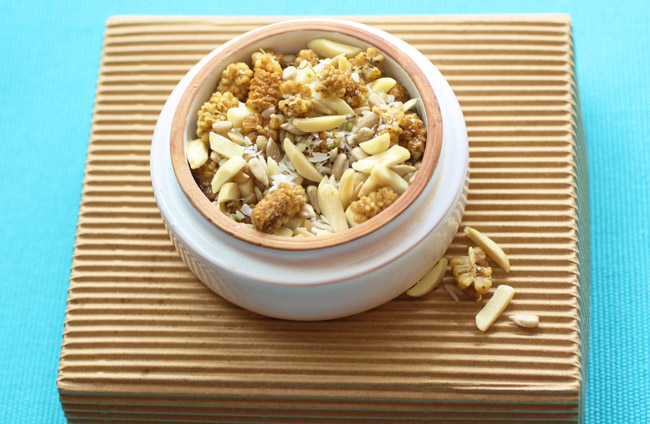 Summer is over and so it is back to school and back to trying to figure out what in the world to put in my son’s lunchbox. Although I always make him a good breakfast and dinner, I admit that I am not the most creative lunch-box packer in the world. I tend to pack the same things over and over (an apple, hardboiled pastured organic egg, almond butter and banana sandwich on sprouted whole grain bread, hummus with carrots, etc.) Our son starts school at 8:00 in the morning and then has football practice until 5:30, so I really need to make sure I pack enough food and work in as many nutrients as I can. When trying to optimize nutrition I frequently turn to superfoods such as chia seeds, hemp seeds, cacao nibs, etc. because they pack such a powerful nutrient punch, which is especially important for growing kids! In the past year or so I have discovered dried mulberries, a super delicious and sweet superfood that my son is particularly fond of.  Dried mulberries are perfect for incorporating into my superfood recipe for trail mix (below), which makes an ideal lunchbox item that really does pack oodles of nutrients.

A SuperFood for Sugar Lovers

If you are a lover of all things sweet (like me!) and have never heard of mulberries you mustn’t miss out any longer. Mulberries, particularly dried mulberries, are amazing.   With a hint of vanilla, they are naturally sweeter than some other common berries such as raspberries and blueberries. And dried raw mulberries are the perfect way to satisfy your sweet tooth (note: fresh mulberries are somewhat bland and not nearly as sweet as dried mulberries.)  Mulberries are about the size of raisins and can be substituted for raisins in just about any recipe. If you have a Vitamix they are ideal for sweeting smoothies, SuperGreen shakes, etc.

Considered a superior anti-aging superfood, mulberries are particularly rich in resveratrol—the antioxidant praised in red wine that combats free radical damage and fights inflammation. Since resveratrol is not found in many foods, this makes mulberries a much sought-after superfood.

Where can you find dried raw mulberries? Look for them at a natural foods store or online from Navitas Naturals.

Note:  this superfood recipe makes a lot! But it will pretty much keep forever if you store it in a zip-top bag in the freezer. It is great for packing in lunchboxes (kids love it!), traveling or refueling after a workout.

Combine all ingredients in a zip-top bag, Shake the bag to mix ingredients together. Eat and enjoy!