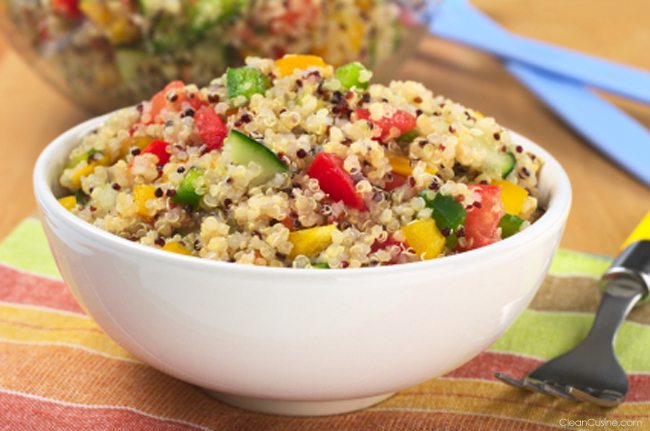 Keep in mind, whether they are organically raised or not, animal foods contain considerably more toxins than plant foods simply because they are higher up on the food chain—the higher up on the food chain you go the greater the chance of acquiring more toxins found in the environment. Every step you climb up the food chain ladder there is a greater chance of accumulating and concentrating toxins; toxic overload can tip the body’s balance toward inflammation, illness and accelerated aging.

While it would be ideal to eat 100% organic food, if this is not possible—and it usually isn’t— it is important to know you will still get far fewer toxins choosing non-organic plant foods over even certified organic animal foods.  Switching to “clean” vegan sources of protein such as lentils, beans, nuts, seeds, whole soy, etc. will lessen the load on your liver, which is your body’s most important natural filtration system.

While we aren’t vegans or even vegetarians, we consider ourselves “flexitarians” because we do actively try to eat less animal foods and more plant-based foods as part of our Clean Cuisine lifestyle (in general, we try not to consume more than 1 serving of any animal food per day) When we do eat animal foods we make sure we get the “cleanest” ones possible such as choosing organic, pastured beef as opposed to conventional grain-fed beef that has also been exposed to hormones and antibiotics. (Note: when choosing “clean” animal foods it is important to go beyond organic and make sure you know what the animal ate! Just because an animal is raised organically does not mean it was fed a healthy diet. The diet of the animal makes a BIG difference in the overall health of the animal.)

When you tell people to reduce their consumption of animal foods the first alarm bell that goes off and the thing they worry most about is that they won’t get enough protein. This is not something to worry about as long as you eat enough calories. Also, keep in mind, protein is an essential part of plant cells, at least some protein is found in all plant foods, including vegetables. Did you know that per calorie, cooked spinach has more than twice as much protein as a cheeseburger?

Not only do plant foods supply plenty of amino acids and protein, they come packaged with all sorts of anti-aging and health promoting and body-cleansing “perks” in the form of antioxidants, fiber and phytonutrients that are not found in animal foods. Choosing to eat a variety of the following foods will supply your body with adequate protein containing all the essential amino acids.

And yes, you can still have some animal foods as part of the Clean Cuisine Natural Detox but you should consciously try to eat less animal foods in general. If you can reduce your consumption of animal foods down to one serving a day you’ll be making great strides in reducing your toxic load.

P.S. We also like to incorporate “Meat Free Mondays” where we are vegan for the day.