You are here: Home / Recipes / Side Dishes / The Best Way to Cook Brussels Sprouts
Jump To Recipe

A conventional Brussels Sprout Hash recipe typically involves a good amount of bacon and butter, but you can clean things up considerably without compromising flavor, texture or anything else….

Hash is a dish consisting of diced or chopped meat, potatoes and spices that are mixed together and then cooked either alone or with other ingredients, typically onions. The name hash is derived from the French verbhacher (to chop). Brussels sprout hash applies the same technique used to make hash and simply swaps Brussels sprouts for potatoes. You could certainly add finely chopped meat too, but my version below is meat-free. You could even add potatoes for a heartier dish.

Overcooking is the number one thing to avoid with Brussels sprouts. Keep in mind, when the color and brightness fades, the flavor often does too. Even worse, Brussels sprouts, like their cruciferous cousins–broccoli and cauliflower, give off a less-than-appetizing stinky odor if they are overcooked. And no good can possibly come from any foul smell in the kitchen!

But, if you treat them right, these little gems have the potential to become your new favorite vegetable. Really. 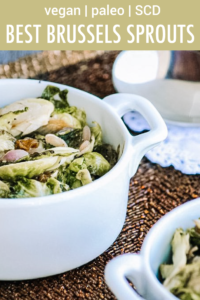