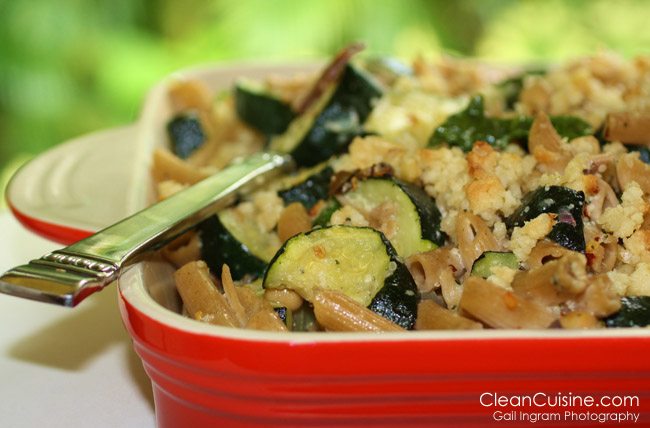 Pasta is a staple meal in our house, especially on “Meat-Free Mondays.” A lot of times I don’t exactly follow a recipe but rather just pull this and that from the pantry and make a big pasta casserole or one-dish-wonder.

The sprouted pasta recipe here for whole grain penne with roasted zucchini and shitake mushrooms is a one-dish dinner, but with a classy spin. I actually first got the idea to make this dish from Bon Appetit magazine. I revamped and healthed it up but the end result is so good that I’ve even served it to guests at a few dinner parties.

One of the biggest tweaks I made to the original Bon Appetite recipe was the addition of hemp seeds to make a special rich and creamy less-cheese cheesy sauce. The hemp seed addition sounds odd, I know, but it works. I combine 1/4 cup grass-fed  yogurt with 1/4 cup hemp seeds, 2 tablespoons Parmesan cheese, 1 tablespoon nutritional yeast and 2 tablespoons hemp milk. And voila! You end up with a sensational less-cheese cheesy sauce.

Why Use Sprouted Pasta?

Chances are if you are trying to eat healthy you choose whole grain pasta over the standard white stuff. That’s a big step in the right direction, but it is still not the absolute very best choice from a nutrition standpoint.

Health wise, whole wheat pasta is a nutritional shadow of sprouted whole grain pasta. I’ll even say sprouted pasta is better for you than plain whole grains. That’s because sprouting takes whole grains to a whole new level. Sprouting is actually the only way to release all of the vital nutrients stored within the whole grain. Sprouting also makes the whole grains easier to digest. In fact, if you have issues with gluten sensitivity, you’ll love that sprouting predigests much of the gluten, and you just might very well find you can eat sprouted pasta without any problems.

Look for Food for Life Pasta

As always I encourage everyone who buys anything from a box to read the ingredients and make sure everything looks A-Ok. Food for Life Pasta passes with flying colors. Take a look at the ingredients….

Amazing. I truly enjoy the rustic heartiness and complexity of texture intrinsic to sprouted pasta much more so than the blander whole wheat variety. You just have to try it to see what I mean.

Be sure to note that sprouted pasta cooks in about half the time of regular pasta or whole wheat pasta. You’ll only want to cook your sprouted pasta for about 4 ½ minutes. This is because sprouting predigests the gluten and therefore the boiling water penetrates the pasta quicker. Be careful not to overcook your pasta or you’ll end up with a sticky, gummy mess. 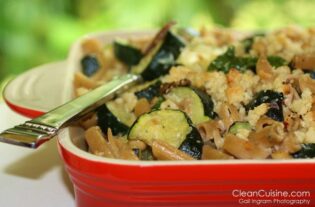