Want a fun, fast appetizer guaranteed to be a hit with everyone at the party? Make bruschetta! There are variations on “party in your mouth” bruschetta galore but I’m particularly fond of my Healthy Roasted Easy Artichoke Bruschetta recipe. My Clean Cuisine version of this party favorite is low on oil but rich in flavor thanks to the pine nut “crumbs”.

Bruschetta can be served on anything from crackers to toasted pita pockets to bagel slices but I prefer to serve all bruschetta on top of crostini. My girlfriend Claudia calls my crostini “cuties.”  And yes, they are quite cute… and super healthy too!

How to Make Healthy Crostini “Cuties”

Sprouting releases all the vital nutrients stored within the whole grain and therefore significantly enhances the nutritional profile of any whole grain. Also, keep in mind even “healthy” whole wheat flour is going to have a significantly expanded starchy surface area and can therefore increase blood sugar levels much more so than eating whole grains that have not been processed into flour. This means eating flourless sprouted whole grain bread will be digested slower than regular bread made with flour and also be better for keeping “fat storing” insulin down and blood sugar levels more stable. Sprouted flourless bread is simply the most nutrient-dense and most slimming bread to eat.

Although Nature’s Path Manna Bread  is my favorite sprouted bread for snacking on, when making crostini, I prefer organic Food for Life “7 Sprouted Grains Bread” because they can easily be cut into little neat and tidy little toasts. The ingredients are as pure and natural as can be (see below). I also like the fact this bread includes a variety of grains and not just wheat. Although I say this all the time, it’s worth repeating…the most important thing to look at when buying any packaged food is the ingredients (not the Nutrition Facts!) Check out the super healthy ingredients in Food for Life bread:

I last made my Roasted Artichoke Bruschetta piled on top of Crostini “Cuties” a few months ago when we had “Girls Night In” at my house and the ladies gave the appetizer a 5-star rating. I had promised to get the recipe up long before now, sorry girls! Saying and doing are two things and everyone knows I can’t do two things at once. But here you go ladies, better late than never…. 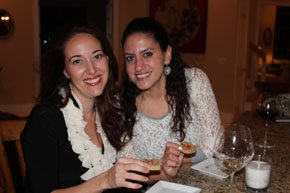 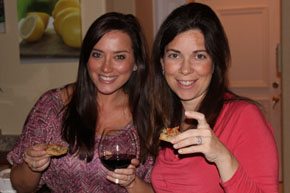