You are here: Home / Recipes / Appetizers / Edamame Hummus on Crostini 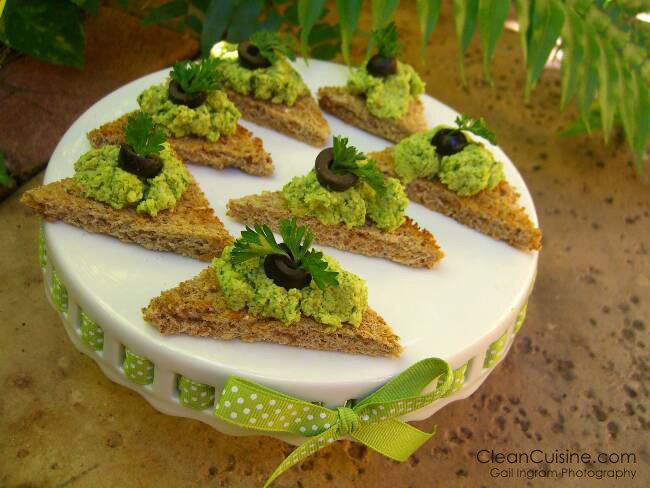 Sometimes it is hard to find easy healthy recipes that are not only crowd-pleasing but also super tasty. Edamame beans are ever so slightly sweet with a mild nutty flavor that just about everyone loves. When entertaining, I like to make hummus from edamames as a twist on the usual chick-pea version. This edamame hummus is not only delicious, but incredibly easy to make too.

The sprouted whole grain crostini (mini toast points) used in this recipe are the perfect foundation for a variety of healthy snack recipes. You can be creative and top crostini with regular hummus made from chickpeas, julienned sundried tomatoes packed in extra virgin olive oil, raw almond butter, carrot hummus, olive tapenade, etc.

I prefer organic Food for Life “7 Sprouted Grains Bread”. It is flour-free, has a low GI (and is therefore good for diabetics) and tastes incredible…especially when toasted! The ingredients are as pure and natural as can be (see below). I also like the fact it includes a variety of grains and not just wheat. Although I say this all the time, it’s worth repeating…the most important thing to look at when buying any packaged food is the ingredients (not the Nutrition Facts!) Check out the super healthy ingredients in Food for Life bread:

How to Make Edamame Hummus on Crostini

For the Sprouted Whole Grain Crostini:

For the Edamame Hummus:

Note: this dairy-free, vegan recipe can be made up to 2 days in advance and stored in an airtight container in the refrigerator. The flavors are best served at room temperature.