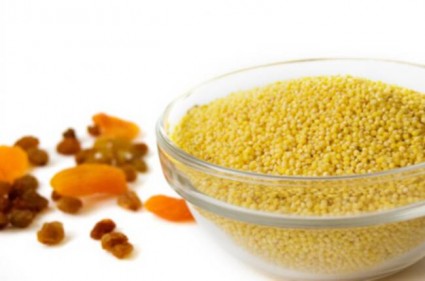 My friend Cherie asked us over for a dinner party the other day and while we were on the phone she wanted to know if I had any ideas for a healthy side dish. I suggested a whole grain pilaf of some sort made with millet. I was on my cell phone standing in the checkout lane at Publix when I gave Cherie the suggestion and when I got off the phone the cashier asked “Isn’t millet bird food?” Hmmm……I’ve been eating millet for years now and I had never thought about it like that. But, after a few moments of thinking I realized yes, millet is a food birds eat. But, it’s also perfectly healthy for people too. And no, Publix doesn’t sell millet. However, you can easily find it at any natural foods store. It’s cheap and you can buy it in bulk.

Teeny-tiny and butter-colored, millet has a mild, pleasing and ever so slightly nutty taste (pan-roasting enhances the nutty flavor.) It has a texture and taste somewhere between egg-rich pasta and cornmeal.

Millet swells tremendously when cooked and makes a great alternative to oatmeal for breakfast. It is particularly delicious with almond milk, chopped baked apple, cinnamon and a drizzle of raw honey.  Millet is also a fabulous whole grain for fall because it combines particularly well with sweet winter squash and root vegetables. For variety, I often substitute millet for a number of different basic rice dishes (for example, instead of making a pilaf with rice I’ll use millet instead.) In the Caribbean, millet is served with peas and beans but I especially like the combination of millet, chopped parsley, julienned sundried tomatoes packed in extra virgin olive oil, lemon juice and black beans. Yum!!

Although a lot of people in the United States have probably never eaten it, millet is a nutritious whole grain and a staple food of almost a third of the world’s population, including Africa and Asia. Millet is alkalinizing, easy to digest and particularly rich in B-vitamins and heart healthy magnesium.

Unrefined whole grains, including millet, should be a staple food in any clean eating diet because they supply an excellent source of energy along with a wide variety of nutrients and fiber.

One of the reasons I like including millet so much in my own diet is because it’s a great alternative to ubiquitous wheat. Assuming you don’t have gluten intolerance or wheat sensitivity there is nothing intrinsically wrong with wheat other than the fact that it’s eaten SO SO much. Millet is a great nutritious whole grain wheat alternative.

Yes! if you have a wheat or gluten intolerance millet is a gluten-free whole grain you can safely eat. Along with brown rice, millet is also a good first food for babies because it is particularly easy to digest. And, because millet is rarely allergenic it makes a good staple whole grain food for the whole family.

How do You Cook Millet?

You basically cook millet the same way you cook rice, which makes it a quick-cook whole grain perfect for easy weeknight dinners. You can cook millet stovetop or in a rice cooker. I cook pretty much all of my whole grains in a rice cooker (with the exception of oatmeal) because it’s just so incredibly easy and hassle-free. But, below are the directions for how to cook millet two ways, stovetop or in a rice cooker. By the way, whenever I make any whole grain I cook a big huge batch and store it in a covered container in the fridge for at least 3 days. After cooking millet I eat it tons of different ways…added to soups, for a hot breakfast in the morning, sprinkled on salads, as a pilaf, etc. Here’s how to quickly cook  millet:

How to Cook Millet Stovetop:

How to Cook Millet in a Rice Cooker:

How do You Pan Roast Millet?

As mentioned earlier, pan-roasting enhances the nuttiness of millet. To pan roast millet place the grains in a heavy skillet (such as cast iron) over low heat and add the millet. Stir continuously until millet becomes fragrant and starts to brown (about 3 minutes).