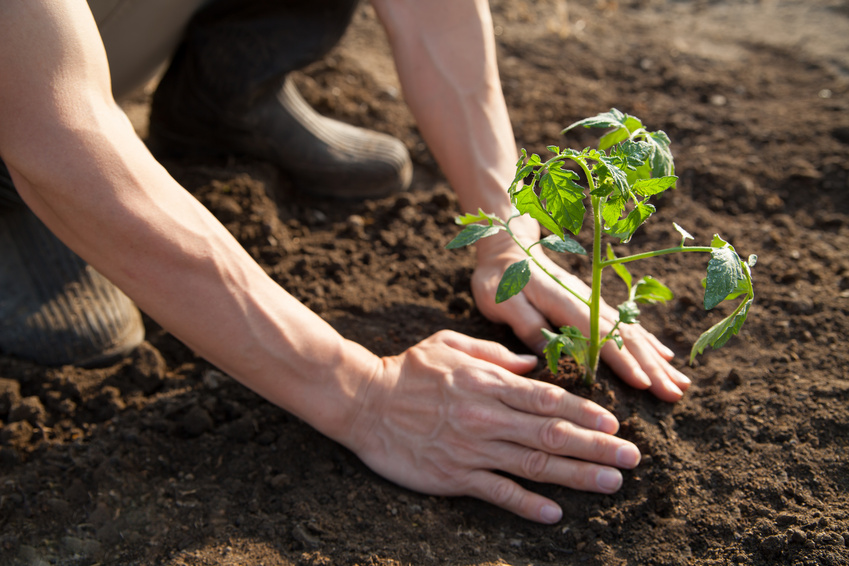 Biodynamic farming is something you are likely going to start hearing more and more about very soon. And that’s a good thing!

Biodynamic farming takes a holistic and comprehensive approach to organic farming where the ENTIRE farm is considered to be a living inter-related system. Biodynamic farming practices emphasize self-sustainability and create healthier and more nutritious plants while simultaneously healing the earth by replenishing the soil and enhancing the overall nutrition to the plant, soil and/or livestock.

Another big distinction between organic farming and biodynamic farming is for a farm to be certified Demeter Biodynamic the entire farm must be certified. In comparison, with USDA Organic certification, only an individual parcel may be certified within a conventional farm.

Could Biodynamic Farming Be the Answer for Some People Who Suffer with Non-Celiac Gluten Sensitivity?

First of all, if you have our Clean Cuisine book, you know we do not recommend people eat a huge percentage of their daily calories in the form of wheat—or any grains for that matter—especially when you consider all of the countless other nutrient-dense foods they should be eating such as fruits, vegetables, potatoes, beans, nuts, seeds, pastured eggs, wild fish, etc. And of course we recommend that the grains people do eat always be in their “whole”, unrefined and most nutrient-dense form. I personally have about one or two servings of whole grains a day and I have always made it a point to never have 2 servings of the same grain in one day, so I am certainly not eating a massive amount of gluten or wheat. Luckily, nobody in our family has a problem with gluten or wheat, so we have not needed to eliminate them from our diets. For years now my family has also only eaten organic wheat (more on the potential significance of this in a bit.) Having said that, I do not deny that some people absolutely cannot tolerate wheat/ gluten and do better when eating a gluten-free diet.

However, the fact that non-celiac gluten sensitivity is rather difficult to diagnose makes things a bit tricky. For the record, the mainstream diagnostic criteria for making a diagnosis of non-celiac gluten sensitivity is: 1) you must have a negative blood test for celiac disease and have no sign of damage on an intestinal biopsy, 2) your symptoms must improve when gluten is removed from your diet, 3) recurrence of symptoms must occur when gluten is reintroduced, and 4) there must be no other explanation for your symptoms. Note: Gluten sensitivity is not the same as a wheat allergy, a far less common problem with symptoms like swelling, itching, skin rash, tingling or burning of the mouth, and nasal congestion.

But what makes things really tricky is when sometimes people who have been diagnosed with non-celiac gluten sensitivity over here in the United States end up going to someplace in Europe, such as France or Italy, and return home reporting they just couldn’t help but eat some wheat-containing bread or pasta while overseas—but miraculously some of these people report their gluten-sensitivity issues are not brought on from the “European wheat”. How could this possibly be?

I suspect that for a certain number of people, their gluten sensitivity just might have something to do with the herbicide glyphosate, which is a toxic endocrine disruptor by the way (you can read more about the negative health consequences of glyphosate on PubMed HERE) and “dry harvesting”.

What is Glyphosate and “Dry Harvesting”?

You might have heard that the wheat we eat today is not the same as the wheat our grandmothers ate. This is definitely true, in part because of a relatively new farming technique called “dry harvesting.” Although the term “dry harvesting” doesn’t sound bad, don’t let the name fool you!

Basically, “dry harvesting” involves spraying healthy wheat plants with the toxic herbicide glyphosate (the active ingredient in Monsanto’s Round Up) a few days before harvesting. This process starts to kill the plants and then makes them easy to harvest, but the toxic residue stays on the wheat. Not surprisingly, research shows people who eat the glyphosate-sprayed wheat end up with the toxin in their system. And since the symptoms of glyphosate exposure happen to be very similar to the symptoms of gluten intolerance, this might help explain why it can often be difficult to test for gluten-sensitivity that is not celiac disease in so many people. And in fact, a new peer-reviewed paper published in the Journal of Interdisciplinary Toxicology (Vol. 6(4): 159–184 ) actually shows that celiac disease, gluten intolerance and irritable bowel syndrome are on the rise and that rise has taken place in direct parallel with the increased use of glyphosate (Roundup) herbicide.

Glyphosate also destroys our healthy gut bacteria on many levels, thus leaving us susceptible to digestive disorders, nutrient deficiencies, and food allergies.  Some researchers believe that glyphosate may in fact act as a transporter for aluminum (a common vaccine adjuvant) into the brain and even transport arsenic into the kidneys.

Glyphosate is crucial for growing genetically modified (GM) crops, many of which have been modified (often called “Roundup Ready” crops) to withstand large amounts of this toxin.

Why would a crop be modified to withstand a lot of toxic herbicide?

It all boils down to money.

Here’s the deal: a farmer can only spray a certain amount of toxic weed killer on a wheat crop before the toxin totally kills the wheat. But genetically modified “Roundup Ready” crops can survive Roundup herbicide while every other living thing surrounding the crop dies. This then allows farmers to use massive amounts of Roundup on our crops (especially on our wheat!) And guess what? The company that happens to make Roundup herbicide, Monsanto, makes the Roundup Ready seeds as well–so the farmers buy both the seeds AND the herbicide from the same company. It is a very profitable little gig Monsanto has going on—but there is no doubt this company is putting profit before public health.

Since many countries in Europe remain hostile to genetic engineering, the whole glyphosate/ “dry harvesting” issue could potentially explain why some people who are wheat sensitive over here in the United States find they do not have problems eating wheat in certain parts of Europe. Europe has a much more extensive regulation on the use of glyphosate on wheat than we do (you can read more about the European regulations HERE.)

Gluten-Free Does Not = Glyphosate-Free!

By the way, if you are currently following a gluten-free diet, you need to be careful of all of the numerous gluten-free products on the market today that are either made with GMO’s or made with non-organic grains that have been sprayed with glyphosate!

Ever since learning about the nutritional benefits of biodynamic farming I have made it a point to buy biodynamic farmed ingredients whenever I possibly can, which is why the main all-purpose flour I use now is ISIS Biodynamic Whole Wheat Flour. This flour has been carefully cultivated, stone ground at low temperatures to retain the natural nutritional properties intrinsic to the wheat and it is 100% organic and non-GMO. It tastes and bakes just like regular whole wheat flour too, by the way.

Again, I am not saying we should all be eating copious quantities of wheat (or any other single food ingredient!) but wouldn’t it be nice to be able to tolerate some wheat-containing foods every once in a while? Even if you are not wheat-sensitive, wouldn’t you like to know you are getting the very best and most nutritious wheat? And wouldn’t you like to avoid the toxin glyphosate?

Choosing organic foods means you will be avoiding GMO’s and crops sprayed with glyphosate, so this is one huge reason to choose organic, but biodynamic farming takes the nutrition of our food to a whole new level and I think it yields the healthiest and best ingredients on the planet.

If you currently happen to be gluten-sensitive (or suspect you might be?), why not put ISIS Biodynamic Whole Wheat Flour to the test and see how your body responds? Again, I don’t suggest eating 6 to 12 servings of grains a day, but one serving of a food made with byodynamic whole wheat flour a day just might be tolerable?

Just some food for thought…